The Things Jesus Doesn’t Do For Us 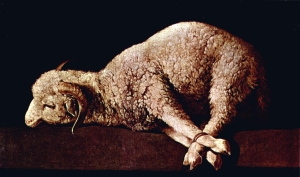 We often hear a steady stream of words about what Jesus “did for us” around this time of year, around this stage of Holy Week. Last night, at our church’s Maundy Thursday service, we shared a simple meal together and walked through the familiar story from Jesus’ arrest to crucifixion. We do the same thing each year, and each year something new stands out to me. This year, I was struck the things that Jesus didn’t do for us as he walked the tortuous path to Calvary.

Fight. It seems rather obvious, but it’s worth remarking on nonetheless. Do you think I cannot call on my Father, and he will at once put at my disposal more than twelve legions of angels? Well, seriously, Jesus. If you have all that at your disposal, how about a little help? We’d settle for even a legion or two. But Jesus doesn’t fight.

Legitimate violence. One of Jesus’ companions does precisely what you would expect a righteous revolutionary to do. He pulls out his sword and gets to work. If ever there was an injustice that cried out for armed revolt, this would be it. Arresting an unarmed man praying in a garden?! But Jesus says, simply, frustratingly, Put your sword back in its place. (How infuriating! If ever there was an ear that deserved to be lie bleeding on the ground…). Violence would have been expected, possibly effective, and certainly justified. Self-defense, at the very least. But Jesus doesn’t choose this way.

Sanction a righteous cause. Am I leading a rebellion, that you have come out with swords and clubs to capture me? Is he indeed. So many at the time and since have wished that he was, have recast him in precisely the terms he rejected to use him to legitimate their own rebellions and uprisings. Jesus, the freedom fighter. Jesus, the revolutionary. Jesus, the defender of our (righteous) cause. Jesus surely could have done precisely what so many wanted. His cause was righteous. The religious establishment was corrupt. The Roman occupiers were brutally unjust. A rebellion was precisely what was required. And Jesus would have been just the man to galvanize the masses. But he doesn’t do it.

Defend himself. The high priest gives him an opportunity to precisely this (or at least the illusion of an opportunity). But Jesus stays mostly silent. He only opens his mouth to cryptically confirm their central charge against him. And he is spat upon and struck with furious fists for his trouble. The Roman governor also queues up for an explanation for Jesus. He, too, receives nothing but maddening silence. Jesus doesn’t speak.

All in all, this is not how revolutionaries are supposed to behave. This will not inspire or invigorate the masses. This will not lead to self-congratulatory hash tags about justice or rising up to fight the power or defending the defenseless. This will not overthrow or overcome much of anything. This will lead to little but the feverish crescendo of a righteous and angry mob. Nothing makes a mob more righteous or angry, after all, than a refusal to go along with a righteously angry script.

And so, the angry mob gives voice to precisely what it thinks of all these things that Jesus doesn’t do. They drag him before their Roman oppressors (inconveniently, the Jewish law forbade execution) and scream for his crucifixion. They express their preference for a Jesus who would protest/revolt/express outrage as they preferred—Jesus Barabbas. Release to us the one who will do things the way we want, they say. We’ve had enough of this Jesus who refuses to do for us what we need done.

Give me a reason, Pilate says. I’ll need more to go on to execute a man than just the mindless fury of a righteous mob. But the crowd just bays all the louder and more mindlessly. Crucify him, godammit! And Pilate shows that, when it comes right down to it, he doesn’t actually need much more than mindless fury at all.

It almost goes without saying that we would have been the same, had we been there with the angry mob. Almost, but not quite. Perhaps we are still tempted to flatter and console ourselves with the illusion that we might have been different, that we would not have dutifully lined up with all of the other sheep, baying for the blood of an innocent man, panting after our usual diet of violence and retribution. But I doubt very much that we would have, that I would have. We still very much prefer a Saviour who does things for us to one who doesn’t. Especially when our cause is just and righteous, as our causes so regularly are.

The story never ceases to be an incredible one. And an incredibly sad one. It is a story that exposes human instinct and human nature in all of its perverse, blood-soaked ugliness, all of its lust for violence and self-justification, all of its inability to think in any other terms than “business as usual.” Were you there when they crucified my Lord? We sang these words last night. And if we were anything resembling honest, we would have to say, “Yes, I was. I am.  There, with the angry mob, baying for the blood of an innocent man…”

Of all the incredible scenes in this incredible story, one stood out to me last night. Judas arrives in the garden to set the whole sordid chain of events in motion. And what does Jesus say to him, as he stands before him, waiting to seal the fate of God and men with a kiss? Friend, do what you came for. Friend. Jesus could have called upon any number of more worthy and accurate descriptors of this man. “Traitor.” “Betrayer.” “Fraud.” “Imposter.” “Hypocrite.” “Coward.” “Collaborator.” “Greedy bastard.” But he doesn’t. One more thing Jesus doesn’t do. He calls him, “friend.” And then he marches off to die, for his friends and his enemies, for Judas and Peter and the servant girl, for Caiphas and Pilate and all the predictable revolutionaries with clubs and swords and righteous causes, for you, for me.

He marches off to die, praying, Father forgive them, they don’t know what they’re doing…  Jesus could easily (and understandably and justifiably) have said, Father, condemn them, for they had every opportunity to choose a better way, they know exactly what they are doing. But he didn’t. One more thing, Jesus doesn’t do for us.

I use the image above in some context or another each year around this time, whether on this blog or in church settings. “Agnus Dei” (“Lamb of God”) is the work of the seventeenth century Spanish painter Francisco Zurbarán.