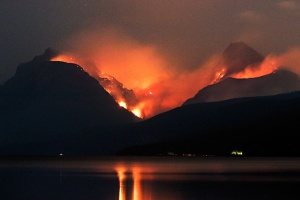 It’s not been a pleasant few weeks for our dear planet. Hurricanes in Texas, Florida, and the Caribbean, an earthquake in Mexico, monsoon floods in southeast Asia, and now wildfires ravaging my own little corner of southern Alberta. These are just the stories that are presently dominating our attention. It doesn’t take much digging beneath the headlines to encounter the uncomfortable truth that awful things are happening all the time all over the world, whether it’s nature venting its fury or human beings manufacturing and multiplying our own. These are indeed threatening days.

I had a conversation with a young man over the weekend. We were talking about Hurricane Irma and the path of destruction it was presently carving across Florida. He asked me if I had heard about the reason why the hurricane had been downgraded to a “category 3” and had avoided a certain area in Florida. I told him I had not. He informed me that it was because a group of people had gathered on the beach, held hands, and prayed.

I sighed (inwardly) and smiled (outwardly). A predictable litany of responses began to assemble in my brain and prepare for dispatch. So God “answered” people’s prayers by sending a slightly less violent and destructive storm than he had previously intended? Were there not people praying in the category 4 parts? What about all the parts of the world presently not in the eye of the storm—are we to imagine that people are more pious in the places that get off easy? Do we really believe that God actively and personally directs the weather? What kind of God waits for an appropriate display of devotion or prayer before restraining himself? Do you really think that a handful of charismatics on a beach in Florida played any role whatsoever in Irma’s path? It was, as I said, a predictable response. And a pretty tedious one, I found myself thinking.

I looked at this young man so full of faith, so alive with passion, so utterly convinced that he knew what God was up to in the storm. And I envied him. I wish that God really did behave as he seemed to think God did. That fervent prayer would bring rain to douse the fires, that pious devotion could stem the tide and turn back the storm, that reverence and adoration could protect us from harm. I wish God worked like a formula where you just plug in the right variables and watch things turn out in a predictable and orderly way. I wished that I could just assemble a handful of friends holier than me and drive an hour down the highway to pray a fire away.

Alas, the world is not a safe place. The world has never been a safe or predictable place. Whether it’s the weather or war or famine or God knows what else, to be a human being has always been to live under threat. We know this. We know that storms come and waters rise and fires spread and diagnoses come and disaster strikes and death comes (physically and otherwise). We know that the world is not and has never been precisely aligned with our preferences, no matter how we labour to engineer a reality that meets our expectations. The fact that the bad stuff is usually happening a time zone or two away from us doesn’t make it any less real or existentially significant. God is, apparently, less concerned about our safety than we are.

Or, perhaps a better way of saying it would be to stay that God is concerned about more than our safety. If to be human is to live under threat, then perhaps we should always be at least attempting to move from the very natural question “How do I avoid what is threatening me?” to the much more difficult, but in the end probably more liberating question, “What does it look like to live and love and hope well under threat?” What does it look like to “take heart” because somehow Jesus has overcome this under-performing world (John 16:33)?

Maybe it looks like holding hands and praying on a beach in the middle of a storm. Maybe this is not the naive expression of simplistic faith in an inscrutable God that people like me are often (self-righteously) pleased to imagine it is. Whatever effect it may or may not have on the weather, perhaps hope and love and life can be strengthened even through such things. There is more than one way to “take heart,” after all, and thank God for that.

From: Current Events, Faith, Suffering, Theology
← A Hell of a Thing to Believe
The Word of God →
No comments yet