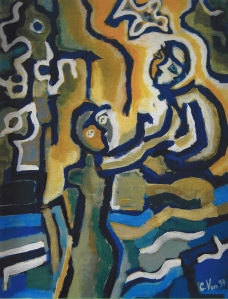 Some people choose a word to guide them into a new year. A word to orient them, to remind them, to challenge and convict them. I’ve done this before with varying degrees of success. This year, however, I’m choosing a story. It’s a story I’ve written about often on this blog, but one that I never tire of reading and re-reading and writing about and discovering new ways to situate myself within. It’s a story that, like all the best stories, tells the truth in different ways and from multiple vantage points. It’s a story that keeps on teaching and inviting and rebuking and restoring. It’s a story that has kept me busy for a few decades at least, so it’s probably up to the task of another year.

I am speaking of the story told in John 8:2-11. We know it well, right? A woman has been caught in adultery. Or, perhaps we ought to say, “a woman has been isolated in her adultery.” It takes two to tango, as the saying goes, but women have always been easier and more convienient to name and shame. At any rate, the law requires that she be stoned and there’s a parade of very religious men eager to get on with doing “what the bible says.” Yet when Jesus is asked to validate all of this zealous judgment (or, probably more accurately, when they attempt to trap him), he famously replies, “Whoever is without sin can cast the first stone.” This sends the very religious men home feeling rather grumpy and not nearly as righteous as they had hoped. And then Jesus says to the woman, “Has no one condemned you? Then neither do I. Go, leave your life of sin.”

It’s quite a story. It doesn’t get old, no matter how many times I read it. Which is a good thing, because I need this story in countless ways.

I need it because I am far too prone to wag my finger at sinners, even if in the privacy of my own mind. I so easily default to “The law says we should…” I too naturally look askance at those whose sin is sensational and obvious and happily unlike my own. I am rather more hungry for judgment and, by extension, personal vindication (for I am not nearly so bad as that, right?) than I would like to admit. I need this story because it lines me up with all the other self-righteous religious hypocrites with stones in their hands and judgment at the ready. This is who I am.

I need it because I am not nearly so righteous as I imagine myself to be or as I project to the world out there. I may not be dragged before the tribunals of religious men in the way that this woman was, but there is certainly no less darkness in me than in her. If anything, there’s more. That my sins are not paraded out in front of others for public consumption and greedy titillation does not make them any less toxic or corrosive or, well, sinful. I, like her, am caught in the act, if not by others than certainly by the God who made me. I am an expert at hiding my sin from others and even from myself. But I cannot hide from the one true Judge.

I need it because like every other human being who calls themself a “Christian,” I am called to walk the world like Jesus. And if Jesus—the only one who legitimately could have done so—refused to condemn this “sinner,” how much more should I be prepared to hold my tongue and release my stones? I need to constantly be reminded of how God himself dealt with sinners like her to see how God deals with sinners like me and to remember how I’m supposed to deal with all the other sinners that cross my path.

I need this story because no matter how scary it might initially seem, there is no better place to be than alone and face to face with Jesus, seeing and being seen, knowing and being known, nothing to hide, rid of all pretense, defensese lowered, hands open, at the mercy of God.

Yes, this is a very good story for a new year. Because while 2018 will undoubtedly contain some surprises, there are a few ways in which I know that I will not be surprised. I will sin against others in 2018. And I will be sinned against (even if probably less than I imagine). I will never stop needing to give and to receive these words: “I do not condemn you. Now go and leave that which is destroying you.” This story tells truths that I will never stop needing.

I am strongly inclined to think that the world, on the whole, could do with less condemnation and more mercy in 2018. But even if I am wrong about that (I am perhaps a poor judge of what something as big as “the world” might need), I know that I need to go and learn what Jesus meant when he said, “I desire mercy and not sacrifice.”