Christian Wiman is a brilliant writer—one of my favourites as I’m sure I’ve mentioned before here. I’ve been eagerly anticipating the arrival of his most recent book, He Held Radical Light and yesterday the blessed brown package showed up in the mail. I spent part of last night reading it. The man has a way of communicating the longing and haunting desire of human existence like few others that I have come across.

In the last chapter I read before trudging out the door to a meeting last night, Wiman was talking about a poem by A.R. Ammons called “Hymn.” Ammons is an atheist, apparently, but the poem is saturated with the divine. Or, at least, a hunger for the divine. You are everywhere partial and entire/You are on the inside of everything and on the outside. Wiman reflects thus on the phenomenon of godless poets inadvertently giving voice to the yearning of faith: 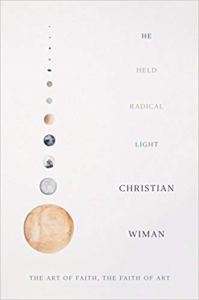 What is a paradox, however, is that “Hymn” is a moving invocation and celebration of God written by a poet who, in his prose, professes not to believe in God. “Hymn” is more explicit about its spiritual lineage than… poems by Oliver and Gilbert, but they all partake of a common tendency among modern artists: the art contains and expresses a faith that the artist, in the rest of his waking life, rejects. And, quite often… the art relies on, even while extending, the religious language for which the artist has no practical use and of which he is perhaps even contemptuous.

I am inclined toward the latter, not least because I am attracted to Wiman’s beautiful imagery of faith and hope stubbornly emerging out of what seems dead, what some may, in fact, wish dead. I love the image of art needing to “fail” in order to give voice to what matters most to human beings. I love that it’s harder to rid ourselves of God than we may have thought, at least if we want to say anything meaningful.

And then of course, there’s that last line. What do we owe this God and his resurrection blossoms? What changes are demanded when we discover that the language we hold in contempt is the very language we desperately need? What truths ought our lives to express in response to this God who sneaks in the back door, refusing to be silenced, speaking even when we are determined to shut him up and out?

From: Awe, Books, Doubt, Faith, Poetry, Quotes
← Evil is Right There With Me
The Lord’s Insight →
2 Comments Post a comment