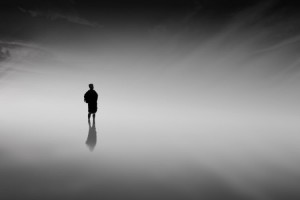 Another Monday morning, another trip to the jail. Again, only two guys show up. There was a third who just about made it, but he transgressed on the walk to the chapel (he said hi to someone in an adjacent classroom, which is not permitted, and which led to a voice over the loudspeaker just as he was entering the chapel: “Back to the unit…”). So, only a few plastic chairs occupied in the circle this morning.

Today’s passage seemed an odd fit, given the particular souls in attendance. It was the parable of the rich fool from Luke 12:16-21. A man doesn’t have enough barns to store his agricultural bounty, so he decides that a building project is in order. Once he has somewhere for all of his surplus grain, he can kick back and settle into the good life he has created for himself. The punch line comes when God says, “You fool, this very night your life will be demanded from you. Then who will get what you have prepared for yourself?” As far as warnings against greed go, it’s an effective story.

But the story seems somehow stranger when it’s read by a young Blackfoot man in blue coveralls and orange plastic shoes. Jeremy* had a toothy smile that enveloped his whole face and seemed really excited to be at the group today. “I just spent six days in the hole,” he said, “so I’m happy to have someone to talk to… Six days all by yourself… You know the walls don’t really talk back. So I’m just glad to be here, man! I done a lot of thinking down there, man… I’m ready to turn things around.”

During introductions we had heard the broad outlines of Jeremy’s story. He had spent the last 3-5 years addicted on the streets. He couldn’t remember exactly how long—there was a stretch of time that was just a fog of drugs and pain. He figured it started when his dad and two of his younger brothers died, but he couldn’t remember exactly when that happened either. He fathered two kids while a teenager, but his mom (who had him at fifteen, too, thus becoming a grandma at thirty) takes care of them now and he hasn’t seen them much lately. “I grew up with a drunk for a dad,” he said, “and I hated to see my dad that way… I don’t want my kids to see me when I’m high.” He talked of having nowhere to sleep and owning nothing but the clothes on his back. He talked of stealing and lying to feed his addictions. He talked about burning so many bridges. “I hurt a lotta people, man.”

It was hard to imagine that the problem of what to do with his material excess was a pressing problem for Jeremy. I doubt he had spent much time thinking about building bigger barns. His life sounded like a desperate lurching from needle to needle, trying to mask the pain of a life of trauma. But he dutifully tried to answer the questions from the outdated devotional material. No, we shouldn’t be self-important… Yes, pride is a big obstacle to making things right with God and neighbour… No, we shouldn’t hoard our possessions… Yes, we need to learn how to trust… Sometimes I find myself wishing we could just put the curriculum away and sit with each other’s’ stories more.

Part way through our time together this morning, Jeremy had a story of his own to tell. “You know, I remember this one story that Jesus told… There was this rich guy who invited Jesus over to supper. And so he’s getting everything ready, right, because Jesus is an important guy to have over for supper… And then this young woman shows up at the rich guy’s house and she asks for something to eat. And the rich guy says, ‘Not now, I’m having Jesus over for supper soon.’ And then an old man shows up and he’s thirsty. The rich guy says the same thing, ‘No, Jesus is showing up for supper.’ So he waits and waits… But Jesus never shows up. The next day he meets Jesus on the street and says, ‘Why didn’t you come over to my house for supper last night?’ And Jesus says, ‘I did. I came twice, once as a young woman and once as an old man, but you didn’t let me in.’”

Jeremy smiled when he finished his story. “I always smile,” he says. “People say that my smile is contagious.” “It is,” I say. “It really is…”

I found myself thinking about Jeremy’s story more than Jesus’ story from Luke 12 as I drove home from the jail today. I wonder how often Jesus shows up at the door and we don’t let him in because we’re waiting for more esteemed looking guests. We might be off building bigger barns, or we might just be lazily recycling religious platitudes. There are all kinds of ways to store up imagined security for ourselves while avoiding the invitation to seek first the kingdom of God.

I don’t know how or where Jeremy heard the story he shared, but I have little doubt that it was Jesus who told it to him.

From: Jesus, Pastoral Ministry, Stories on the Way, Suffering, The Jail, Uncategorized
← Egypt for Your Ransom
Genesis →
6 Comments Post a comment