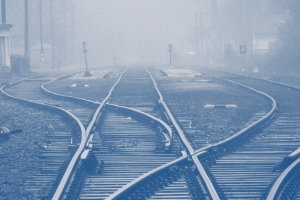 The early days of January are a quite natural slice of time for taking stock, personally, professionally, relationally, existentially. These are the days when we are encouraged to cast an evaluative glance in the rear-view mirror and to look purposefully ahead to what may yet be. These are the days of making resolutions that we will almost certainly break, but I suppose we can’t be faulted for that. We are wired for hope and newness and possibility. We don’t know what to do with ourselves, it seems, unless we’re expecting more from ourselves, others, and the world.

I always feel like the first sermon of a new year is a good opportunity to say something significant as we embark on another spin around the sun. Wait, no, that doesn’t sound quite right. I like to think that I attempt to say something significant every Sunday… but… well, you know what I mean. But what to say about newness and faith, hope, and love that hasn’t been said before? What to say to inspire, encourage, strengthen, and enliven in these days where so much of the news we hear about the church is of decline and stasis and irrelevance?

I did some figuring this morning. As of January 8, 2020, I have written 389 sermons and 1310 blog posts. I’ve written a bunch of articles and reviews and contributions to books, too, but I couldn’t be bothered to add those up. I can only handle so much math in a day. At any rate, that’s a lot of words. I may have shuddered audibly when I looked at the fruit of my mathematical exertions displayed on my little pad of paper. I seem to have had a lot to say over the years. But I’ve noticed that very often when January rolls around, the creativity well seems to run dry. And it can be very easy to slide into casual clichés as a writer and a preacher, particularly when fatigue or boredom or stress or just plain old lack of inspiration settle in.

Take this past Sunday for example. I was talking about the first chapter of Paul’s letter to the Ephesians, about how contrary to the typical New Year’s exhortations we receive to do more to become the people we’ve always wanted to be, to make the world a better place, blah, blah, blah., this passage reminds us that God has, in Christ, already done everything for us. I talked about the importance of anchoring all of our human striving in the finished work of Christ on our behalf rather than frantically trying to do more for Jesus in some kind of misguided attempt to save ourselves or earn favour with God. These are our two choices, I said. We can act out of fear and anxiety and a desire to prove ourselves or as a response of gratitude and love to the love of God displayed in Christ.

It all felt good and true enough as I was saying it. It felt like the sort of thing that a Christian preacher might say on the first Sunday of a new decade. But it also felt a little bit like a cliché. It felt a bit triumphant and simplistic and too precise: one path leads to destruction, the other leads to spiritual health and vitality. It felt like something you’d see on Pinterest or in a TED Talk. I felt like I was one of those popular speakers telling people to be kind to themselves or that they were “already enough” or to “let go and let God.” All of which are true-ish things to say, but I don’t know. I felt like a weird combination of a Calvinist and Brene Brown.

Anyway, after the service a woman approached me. “Thank you for your sermon,” she said. I smiled magnanimously as she continued. “I appreciated it… but, you know there’s a third option, right?” I stared blankly at her, puzzled. “A third option?” “Yeah, she said. Some of us have no trouble believing in the finished work of Christ and that it precedes and grounds all of our doing. We’re not trying to earn our salvation or anything like that. We’re just exhausted. We look around and there’s so much to do, so many hurting people, so much need and so few people to do the work. It’s not as simple as, ‘either you’re living in response to the love of God or you’re trying to earn it.’”

I gulped. She was, of course, absolutely right.

A few people had meandered to the periphery of our conversation and gradually the more familiar harmless small talk overtook proceedings. But I couldn’t stop thinking about her comment. As people began to drift away, I looked at her and said, “So what’s the sermon you would preach about the third option?” A smile crossed her face. She was silent for a while. She looked like she was starting to say something a few times before she sighed and said, simply, “I don’t know.” “I don’t either,” I sheepishly replied.

I still don’t, really. I’ve been thinking about how I would modify last Sunday’s sermon in light of the aforementioned conversation, but I don’t have many great answers. I don’t think I would repudiate my sermon entirely. I still think that it spoke true things about God and about us. I suppose the lines were just a little too clean, the categories a bit too tidy. The world and the life of faith are a bit muddier and more complicated than the clichés that tired preachers sometimes trot out. You can have your theology right as rain and still be exhausted and bent low by the pain of the world. You can have your theology backwards and upside down and seem to be hitting it out of the park. And, of course, all points in between.

I suppose the early days of a new decade are as good a time as any to be reminded that life is more than a theology exam or a performance evaluation, that sometimes there’s a third option in addition to the worn out truisms that tell the truth but not enough of it.