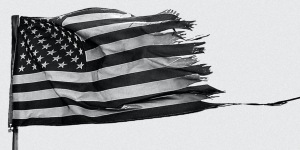 Four years ago, as another American election cycle staggered toward its exhausting conclusion, I wrote a post called “Do These Politics Make Me Look Christian?” I had just returned from a trip to Pennsylvania, as it happened, and had gotten a whole new level of insight into US political culture and discourse during an election season.

Reading the post again, with four years of a Trump White House in the rear-view mirror, I wouldn’t change anything substantive. I am still amazed at how eager Christians are to define themselves by their political attachments as opposed to, say, their allegiance to Christ and his kingdom. I am still bemused at how Canadians and other non-Americans seem to vicariously live through American political theatre. I am still troubled by how politics has become a perverse combination of entertainment and ideological warfare rather than something like an attempt to find practical solutions to common problems that we have to negotiate together

Speaking of ideological warfare, this is one aspect of our political culture that has undoubtedly gotten worse over the last four years. It is becoming something of a truism to say that twenty-first century life is one of ever-increasing polarization. Richard Beck recently addressed this in a series of posts under the heading “Heroism, Hostility and Politics” (parts one, two, and three). Increasingly, he says, politics is the realm where we seek meaning, identity, and moral heroism. Politics becomes a space not to negotiate issues, necessarily, but our feelings about issues and, more particularly, our feelings about those who differ from us. Beck describes our discourse in this context as a form of “moral sorting”:

Affective polarization is one force behind the great tribalization of American politics. In this tribal landscape, political issues aren’t debated to seek common ground or solutions. Issues become identity markers, social tools we use to figure out which political team you’re on. We’ve all witnessed this moral sorting on social media. An event crashes into our collective consciousness and we watch the two tribes predictably array themselves on either side of the emerging debate. This moral sorting explains why our political debates, whether at the family reunion or on social media, have become so unproductive. We’ve stopping seeking solutions. We’re picking teams and declaring our allegiances.

I suspect I’m hardly alone in recognizing the “moral sorting” that Beck describes. I have friends who are both very politically conservative and very politically liberal. I often feel “out of sorts,” as it were. It’s rare that anyone ever breaks ranks on any issue. Privately, perhaps, but certainly never publicly. There’s too much at stake, not least our very identities! This is particularly tempting in the hollowed-out landscape of post-Christendom. In the absence of any broadly accepted shared meaning, or where Christian faith is sequestered harmlessly in the attic where we keep the “private beliefs people are allowed to have about stuff that doesn’t matter,” politics rushes in to offer us a narrative of purpose, heroism, and identity.

Beck thinks we should expect more of ourselves as followers of Jesus. So do I.

As a Canadian, I’m obviously not voting on November 3. I’m not sure I’ll even be watching, although I suppose it will be difficult not to cast an occasional glance south of the border Tuesday night. But I found myself nodding along with Beck’s advice to his American Christian sisters and brothers, not least because I know that Americans are hardly the only ones that are prone to these temptations. These are human tendencies, not American ones. All of us who call ourselves Christians should heed his words, in my view, whenever and wherever we happen to be voting:

And so, brothers and sisters, let me call us to some spiritual reflection and labor this election season. Our political holy wars are a sign that something dark is at work in our hearts and nation. I fear that, in our post-Christian world, worldview defense, affective polarization, and tribalism will become our new normal and constant temptations demanding of us an energetic spiritual response. As followers of Jesus, we know what to do. This is a struggle we are familiar with. Our weapons in this battle are the ones we learned in Sunday School. Mercy, self-control, kindness, joy, hope, peace-making, forgiveness, humility, and love. We fight to leaven our faith with these virtues.

Let us leaven our politics as well.