Earlier this week, I set out on a rather mundane and (I thought) noble task. I wanted to buy local. I had a relatively ordinary purchase to make, but it was one that I knew I could either get at some anonymous big box store that’s already made buckets of money during this pandemic or a local shop that I imagined would have been having a harder time of it. Over the course of this pandemic, I have rid myself of Facebook and sworn off Amazon. I’ve tried to avoid Wal-Mart and other big box stores. This would be the next step in my evolution as a conscientious consumer. Or at least some reasonable facsimile, thereof.

I arrived shortly after opening time. I was the only one in the store. I announced my intentions to the salesperson. I needed such and such in such and such a size. The salesperson furrowed their brown in a decidedly less than optimistic manner. They doubted they had what I was looking for. They would look and see. In the meanwhile, I wandered around the store, taking in the sights and sounds. There was little to see but for some inventory that looked old and a little dusty. But I overheard a voice from behind the receiving desk at the back. A man was talking about “the old city of Jerusalem.” Given the news emerging out of the Middle East this week (I suppose uprisings and violent conflict count as a grim sort of evidence that things are returning to a post-pandemic “normal”), and given that I’ve been to Israel and Palestine twice in the last five years (I’ve written about some of my experiences here), I decided to engage him in conversation.

“I couldn’t help but hear the word ‘Jerusalem,'” I said, peering back at the dingy little office where he was sitting. “Have you been?” His head snapped to eager attention and he came around to where I was standing. “Yes, twenty-eight times. I lead tours for my church. It’s one of my favourite places on earth. Here, come with me.” He proceeded to lead me through a labyrinthine set of narrow hallways back into the bowels of his shop. Our terminus was his office which had a wall-sized photo of the city Jerusalem. The Al Aqsa mosque, where the most recent spark was lit for conflict, featured prominently. It brought back fond memories for me. I remember looking down upon it while eating lunch on the Mount of Olives. I remember a moving encounter several years ago where my wife helped a severely crippled elderly woman up the steps to pray. I remembered the lady’s smile and her warm embrace of my wife when they finally reached the mosque. In the midst of all the maddening absence of obvious hope that we were daily learning of, this one scene spoke hope to me.

But back to the shop. My host was enthusiastically loading up a video on YouTube. It was a quite stunning montage of beautiful 4K HD imagery of the city of Jerusalem, the Holy Sites, and the land of Israel more broadly. It was set to beautiful music. After this, he showed me a video of a priest doing a silent video tour through the Church of the Holy Sepulchre. It was eerily empty and seemed strangely holy. Both times I’ve been, the church was packed full of sweaty tourists, greedy for photos. COVID has changed this, of course. But again, the video brought back fond memories. Memories of being able to go and learn and see and do! How exotic and impossible these things seem as our province still seems locked in the grip of this pandemic!

There were more videos that he wanted to show me, but I didn’t really sign up for a morning spent watching someone else’s YouTube playlist. I tried to steer the conversation back to the business at hand. Did you have my size? He brought a few options out, none of which were working very well. But he wasn’t about to stop talking about Israel and Palestine. He clearly wanted to know where I stood on the issue. These tours that you went on, were they more pro-Israel or more pro-Palestine? I said, “Well, most of my time was spent on the Palestinian side of the wall, so I got a first-hand look at some of the suffering and injustice that is part of daily life. But I obviously know that the Israelis have their own stories of suffering, particularly if you go back far enough. It’s such a complex issue.” He nodded. “Yeah, I have a few Arab friends, too. We try to help them…”

I shuffled my feet awkwardly, trying to signal that our business, such as it was, was probably drawing to a conclusion. He didn’t have what I needed, and I wasn’t interested in a long conversation about Israel and Palestine. He had mentioned his church affiliation and I was fairly confident I knew where he stood. One doesn’t tend to go to Israel thirty times without certain theological commitments. We probably weren’t going to agree on an issue that reliably divides people quite forcefully, and I wasn’t anxious to start a heated debate. I just wanted to shop local, not dive into one of the most fraught theo-political issues on the planet. 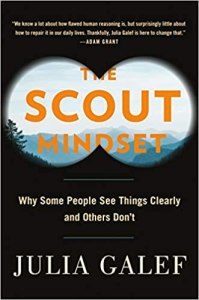 I am currently reading a book by Julia Galef called The Scout Mindset. It’s a book about how we think (and why), how we change our minds (and why), how we make decisions (and why), what we believe (and why). We are highly motivated reasoners, Galef says, echoing the work of Jonathan Haidt and many others. We have all kinds of reasons for thinking and living the way we do, many that have far less to do with reason than we imagine. One of these is the profound need to belong. Much as we like to imagine ourselves as heroic scouts following the evidence where it leads, we very often think what those around us think, what preserves our connections to the social groups that matter to us. We reliably prioritize relationships and connection and the preservation of our preferred identity groups over positions.

Well, because the guy in front of me seemed like a pleasant enough chap. Because we shared an appreciation for the beauty of the region. Because we both loved Jesus in our own way. Because neither one of us wanted to see people suffer and neither one of us had much power to change anything. Because it’s COVID and any kind of pleasant face-to-face interaction with another human being is desperately welcome. Because I evidently preferred a rather small and fleeting slice of belonging than making sure that I staked out my ideological territory. It wasn’t a particularly flattering portrait that this mirror I was holding up to myself was revealing. I guess motivated reasoning isn’t just what other people do. Go figure.

Back to the shop. I thanked the man for his time and began to make my way for the door. “Thanks for the conversation,” I said. “This wasn’t really on my agenda for a Monday morning, but it was nice to talk with you. And I’m really sorry I can’t support your store.” He smiled, thanked me, and said, “Who knows, maybe there was a higher reason for us meeting today.” “Yeah, maybe,” I said. I walked out into the sunshine, simultaneously grateful for and frustrated by the encounter. I hadn’t bought local, despite my intentions. I hadn’t spoken my mind as forcefully as I might have, despite my convictions. I had spent forty-five minutes connecting with another human being, despite my preoccupations. And so it goes. Mixed motives sometimes yield mixed blessings.

The image above is the scene I referred to in the post about my wife and the elderly Palestinian woman at Al Aqsa. It still brings a tear to my eye when I look at it.