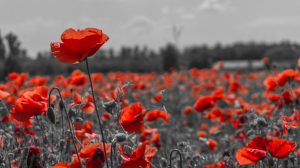 At 7:40 am this morning, I watched my twenty-year-old son walk out the door in full military fatigues. He is a reservist in the Canadian Armed Forces and has duties for Remembrance Day ceremonies later this morning. As you might imagine, this is a bit of a strange and conflicted experience for a Mennonite pastor. I never imagined that I would have a soldier for a son.

A while back, I wrote a piece on, well, peace. And war. And feeling conflicted. And not knowing precisely how to think about it all. Watching my son walk out the door on Remembrance Day 2021 brought it back to mind. I’ve reproduced a lightly edited version below.

Am I a pacifist? Well, yeah, I guess so. But what does it even mean for me—a middle-class white Canadian whose experience has never even remotely been affected by war—to say this? I am anti-war. OK, fine. I am also anti-cancer, anti-poverty, anti-racism, and, well, just generically ­anti-bad-things-happening-in-the-world. So what? Who cares about my shiny ideological artifacts shaped and preserved in a vacuum of privilege?

Perhaps the hardest thing for me to imagine is how, “I am a pacifist” would sound to those in a very different context than my own. To the parents of a child of war who is suffering the effects of a chemical attack, for example. Or to impoverished refugees huddling on hostile borders. Or to mothers who have lost sons and brothers and husbands to conflict. I try to imagine, how, “I can’t support military intervention against those who are brutalizing you because I follow Jesus and Jesus forbids violence” would sound to these kinds of ears? And what if I were in their shoes? Would I be a pacifist then? Or would I want someone big and strong to come in and force the bad guys to stop doing bad things to my people?

I remember sitting at a kitchen table with my wife and her grandfather fifteen or so years ago. I don’t remember how we got on to the subject, but we started to talk about war and religion. I possessed all the misguided, naïve confidence of guy in his early twenties who had done a bit of reading—just enough not to know how very little reading it actually was. I proudly said something about being a Mennonite pacifist, and the floodgates were opened.

My wife’s grandfather had spent half a decade tramping around the mud and blood of WWII Europe, hiding, starving, spending time in POW camps on both sides of the conflict, lying and begging for his life, wielding a gun for whoever had their boot on his neck at the moment. He had lived through horrors I could barely contemplate. You Mennonites are a bunch of cowards! he roared, angrily pounding his frail fists on the table. You are happy to accept the benefits that come through the blood of others, but you won’t fight for it yourselves!! Cowards, all of you! Cowards!!! He was shaking by the end. So was I.

We never spoke of religion or war again. And I resolved from that point on that I would never be so casual with words like “pacifism” again. I realized, then, how words like this can sound to others—especially those who have seen, heard, touched, and smelled the kinds of atrocities that are mediated to me through televisions, computer screens, and words on a page. I realized that I had not earned the right to be pro- or anti- anything that big or complicated. I realized that it was far too easy to say that I was a pacifist when it demanded nothing of me beyond lofty words and theological principles.

To be clear, I don’t think war is the answer. I really don’t. I don’t support it in any way. I think even the most cursory glance at global politics and conflict over the past decade and a half or so makes very plain the fact that however high-minded our collective rhetoric about war might sound at any given moment, war has not accomplished much. To almost no one’s surprise, freedom and democracy—those wonderful words we love to throw around—have not been realized through violence. Violence breeds violence. It always has and it always will. And I know that pacifism is not synonymous with passive-ism. I know that Jesus was not a coward, that he actively engaged his enemies, that he advocated and demonstrated a commitment to peacemaking that was anything but a refusal to dirty his hands with the world as it really is.

So, yes, most days I am a pacifist, whatever that means from where I sit. But there are also days where I think Jesus can have his precious peace because it doesn’t work in a world like ours. Days where I think that, for the sake of the innumerable innocent victims of the violent whims of men, Jesus has no right to demand it of us. Days when I try to look at the world through the lenses of other people—people who have lived their whole lives looking over the fence of my privilege, people who are not afforded the luxury of theorizing or theologizing about peace and violence— and it just doesn’t fit.

I believe, deep in the core of my being, that the world is not made new through violence, and that the cycles and patterns that our war-weary world is so familiar with must be broken by creative, courageous, sacrificial responses of people who are committed to peace. I believe that the way of Jesus is never violence. I do. But, I don’t know… I guess my beliefs just seem like very small and useless things when set aside suffering innocents who need the bad guys to stop doing bad things to them.

I’m going to watch my son at the Remembrance Day ceremony now. Even though there is much that I remain conflicted about and much that makes me sad and bewildered, I am proud of him. And I love him.