Coming to Peace with History

I recently had an interesting conversation about the relationship between history and truth with a group of UBC students with whom I’m going through Lesslie Newbigin’s The Gospel in a Pluralist Society. We arrived yesterday at what is, in my opinion, one of the most important chapters in the book—”The Logic of Election.” In this chapter, Newbigin challenges our assumptions about what election is for, arguing that God never chose a specific group of people—whether the nation of Israel or the church—to be the objects of eternal salvation but rather to be his instruments of extending his redemption to others. According to Newbigin, we do not encounter God as isolated individuals; he has always used other people—both now and across time—to communicate his purposes to us.

When I was a kid I often wondered why God didn’t just send Jesus to die for our sins about three milliseconds after “the Fall,” however this is conceived. If God had known that Christ was going to be the means of reconciling his fractious creation to himself from before the foundations of the world, then why not just get it over with? In other words, what’s the point of history? Why embark on the meandering tortured path that led up to and has followed the career of Jesus of Nazareth? If the point of it all is Jesus kicking in the mechanism by which human sins can be forgiven and entry into paradise made possible, why not spare his creatures the painful ambiguity of life on this terrestrial ball?

This was more than an weird kind of intellectual puzzle for me. In a sense, I resented the fact that my “salvation” depended, in some strange way, upon the story of the “primitive” Israelites, the early church, and all of the other bewildering and, at times, morally problematic cast of characters and stories that litter the Bible and Christian history in general. If I was the one whose “soul” required saving then, I thought, God was obliged to communicate whatever was necessary to attain that goal in terms that I found acceptable and which would be most conducive to my responding in the appropriate manner. To put it bluntly, a crucified Jew who claimed, in a bizarre sort of way, to represent the fulfillment of the hopes of a people with whom I had little in common and whose way of being in the world I found most peculiar and unsettling, did not meet my criteria.

Newbigin has been one of the thinkers that has steered me toward a less individualistic way of looking at salvation, and a more gracious approach to history. Here’s an excerpt from the chapter we discussed yesterday: 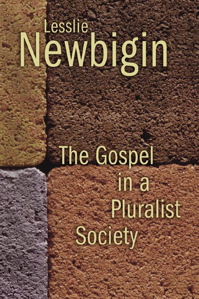 For knowing God, for being in communion with him, we are dependent on the one whom he gives us to be the bearer of this relation, not just as a teacher and guide on the way but as the partner in the end. There is, there can be, no private salvation, no salvation which does not involve us with one another…. God’s saving revelation of himself does not come to us straight down from above – through the skylight, as we might say. In order to receive God’s saving revelation we have to open the door to the neighbor whom he sends as his appointed messenger, and – moreover – to receive that messenger not as a temporary teacher or guide whom we can dispense with when we ourselves have learned what is needed, but as one who will permanently share our home. There is no salvation except one in which we are saved together through the one whom God sends to be the bearer of salvation.

The question Newbigin forces upon me is, I think, this: do I have the graciousness and humility to accept a salvation that is mediated through other sinful, broken, human beings and which comes to me via a long historical process? Can I accept “the foolishness of God” that is “wiser than human wisdom” and the “weakness of God” that is “stronger than human strength” (1 Cor. 1:25)? Regardless of how I think salvation ought to be delivered—God detailing his requirements of me personally in an easily accessible, linear, rational argument, say—can I accept a word that comes to me through a people and a story that is not of my choosing?

The idea that history, not philosophy or science, is the primary vehicle of truth is not an easy one to accept. But affirming that the fullest self-disclosure of the God of the universe and his purposes for the world is to be found in an actual living, breathing Jewish human being who tramped around Palestine two thousand years ago seems to demand it. History—real people, real events, real successes and failures, real joy and pain—is God’s chosen method of bringing healing to the world. It may not be what we would have chosen if we were God, but we’re not God and it seems to me that of all the things that we human beings need saving from, one of them is the illusion, however subtly stated or implied, that we are.

From: Books, Eschatology, Faith, Gospel, Jesus, The Bible, Theology
← Religion as “Playing Kingdom”
Two Ways of Waiting →
No comments yet