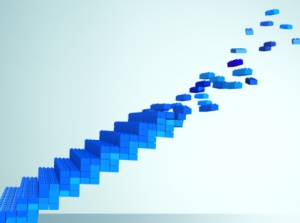 One of the things I find interesting, whether in the course of my thesis research or just ordinary conversations, is the matter of what inclines people to belief or unbelief in God. How is that person A, when presented with the raw data of the natural world, will incline toward atheism while person B will look at the identical data and choose belief? Is faith simply an arbitrary “gift” given by God to some and withheld from others? Or, as fundamentalists on either side of the atheism/theism divide would have us believe, is belief/unbelief simply a matter of who is intelligent (or spiritually perceptive) enough to see the “obvious” truth? All of us, as twenty-first century “modern” people, live in what Charles Taylor has called “the immanent frame”—a set of social, technological, scientific, and political structures which can be understood on its own terms without reference to the supernatural. Why do some choose to see this frame as “open” to the possibility of the transcendent while others see it as “closed?”

This morning’s Washington Post has an interview with Rick Warren (he of “purpose driven” fame) where this question, among others, comes up. The interviewer asks Warren a question which, in my opinion, points to an important feature about how the question of belief vs. unbelief is understood today: “How come some people ‘get’ to believe and others do not? ” Why does God “allow” some, like Rick Warren, to believe but not others? After all, many people would really like the comfort provided by religion but for whatever reason just can’t bring themselves to believe. In response, Warren says a few things about how the Bible promises that who seek God will find him, but he doesn’t (at least in this interview—an admittedly limited forum) challenge the root assumption of the question: God’s primary interest is that we set aside our rational objections and “believe in him.”

I think that most people who are honest about their faith or lack thereof would admit that they are pulled in both directions at different points in their lives (or even at different points of the day!). There are times when God’s existence seems self-evident and there are times when it seems utterly impossible. The world we live in is a deeply ambiguous one; there is no sense denying this and claiming that it points unequivocally to either atheism or theism. Frederick Buechner has memorably stated that “there is doubt hard on the heels of every faith, fear hard on the heels of every hope”; I would say that the opposite is also true—that the persistence of hope hounds even the most hardened skeptic. Belief and unbelief are both plausible ways of “reading” the “immanent frame” in which we spend our days.

So what do we do? Just passively accept whichever way we happen to be inclined and not give the matter another thought? Try to “force” ourselves to believe or attempt to perform the necessary exercises to convince God to gift us with this ability? Or might we perhaps use the ambiguity which makes the matter so difficult to consider a different understanding of what God might be after. What if God’s primary interest wasn’t in getting us to “believe” certain things? What if he was willing to take whatever faith we could muster and use it in the promotion of his intentions for the world? What if God has created the world in such a way that living authentically human lives involves things like trust, commitment, uncertainty, and risk; what if it requires recognizing our dependent and creaturely status and living within the parameters (cognitive and otherwise) which this entails?

I spent some time last night in Pascal’s Pensées (more time than I would have liked—I was digging around for a quote that proved stubbornly elusive!). Pascal is mostly known for the famous “wager” he proposed, an argument that is often ridiculed and dismissed based on an inadequate understanding of what he was really getting at. The wager ought not, I think, to be seen as a crude calculation—I’ve got more to lose if I don’t believe and I’m wrong than if I do believe—but a simple recognition that to be human is to be forced into acting with less certainty than we might like. Near the end of §233, Pascal addresses a variation of the question posed to Rick Warren above: “What if I just can’t believe?” His answer (very loosely paraphrased): live as if it were true and see what happens. Rather than thinking yourself into belief, try living yourself into it? If loving (or even believing in) God is difficult at the moment, start with loving your neighbour.

I don’t think that the ultimate standard by which God will judge us is the degree of certainty about his existence that we manage to conjure up before we die. I cannot imagine God asking me, on judgment day, “did you manage to preserve your belief in me, despite living in a world where my existence wasn’t always obvious?” I can imagine him asking: “Did you act according to what light you were given? Did you seek me with your entire being? Did you refuse to let pride and fear overcome hope in my promise of a better day? Did you nourish and make the most of what faith you had or complain that it wasn’t stronger?”

These questions are certainly difficult ones to imagine answering, but they seem to avoid the implication that human beings are little more than proposition affirmers/deniers (James 2:18-20 is ringing in my ears!). At the end of the day, nobody really benefits from a bunch of people “believing” in God if “belief” is understood as something like “rational acceptance of the existence of a supernatural being.” It’s hard to imagine how God benefits from a bunch of people nodding their heads when asked “do you believe in God?” just as it’s hard to imagine how it changes much for human beings. But if God has intentions for the world that go beyond individual human brains and what they find rationally plausible, and if the realization of these intentions depends, in part, on our ethical behaviour, then maybe this ought to be our main focus. Perhaps if we busy ourselves with doing what we’re reasonably sure God wants us to do, the “belief” in him that we struggle to maintain or discover may be closer than we think.