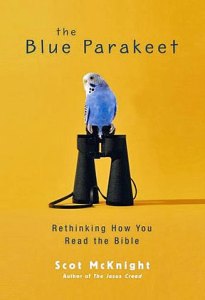 Scot McKnight is an author that I have long been familiar with but have never actually read, other than the occasional post on his (amazingly prolific) site, The Jesus Creed.  Consequently, when he posted an offer to receive a copy of his new book, The Blue Parakeet in exchange for reviewing it on your blog I jumped on the opportunity.

The question of how we are to read the Bible is an important one for all times and all places. How individuals, churches, and denominations answer this question has real effects on real people’s lives; it can be a force for liberation or oppression, it can be a stifling straitjacket or an invitation into possibility and promise. The way that we answer this question—how ought we to read the Bible?—is crucially important, and McKnight clearly understands this as he tackles the subject.

The first question the reader will likely have is “what’s with the title?” Well, McKnight is something of a bird-watching expert, it seems, and it was the presence of an unusual bird in his backyard one day, and the effect this new bird had on the others that got him thinking. The new bird turned out to be someone’s pet blue parakeet that had escaped. But the presence of this bird in an unfamiliar context was what got McKnight thinking about the Bible. He likened this blue parakeet to passages in the Bible that seem strange, out of place, possibly even unwelcome. What do we do with these? Do we try to “tame” them? Return them to their “cages?” Ignore them? How we deal with the Bible’s “blue parakeets” is vitally important, and reveals a good deal about our general approach to Scripture.

According to McKnight, there are at least three basic strategies we tend to take when reading the Bible. First, we “read to retrieve.” The Bible provides us with a straightforward template for living and we simply must apply this template—drawn from a time and place much different than our own—to our own lives in the twenty-first century. According to McKnight, this won’t work because “we aren’t called to live “first-century lives in the twenty-first century, but twenty-first century lives as we walk in the light of the revelation God gave to us in the first century.” The Bible itself shows adaptation to different contexts (think of the early church’s wrestling with the question of how/if the Jewish law was to be understood in the light of Christ) and does not advocate a simple “read and retrieve” approach to Scripture.

Second, we read through (as opposed to with) tradition. This amounts to more or less inflexibly reading the Bible the way “we’ve” always read it, whether the “we” is one of the great historical church traditions, or the particular approach of the little non-denominational church on the corner. Here this or that tradition assumes the position of authority and the effect is the same as in the first case: a context-bound approach to reading Scripture assumes an unwarranted position of primacy, and specific interpretations can become fossilized.

The third option is, obviously, the one McKnight recommends and it is a fairly straightforward narrative approach to Scripture in which the Bible is interpreted in community, with the wisdom of the history of Christian interpretation, and under the guidance of the Holy Spirit. Every specific passage has to be read in the broad context of the overarching drama of creation/fall/redemption or, as McKnight prefers, a movement from oneness (the harmony of initial shalom) to otherness (sin/estrangement, disunity) back to oneness. The story of the Bible is one of the Fall giving way (to varying degrees in various times and places) to the new Creation. For McKnight, the way we read the Bible ought to reflect this.

Obviously McKnight’s book does not offer a radically new way of reading the Bible. His recommendation that we learn to read the Bible as a “story” as opposed to a “law-book” or a set of puzzle pieces to put together has been articulated by others ( N.T. Wright’s The Last Word, and Michael Goheen and Craig Bartholomew’s The Drama of Scripture leap to mind, if only because I’ve read them both in the last couple of years); however, McKnight does offer a fresh way of articulating these truths and his willingness to name what we are actually doing when we read the Bible is refreshing. He unapologetically admits that no one does everything the Bible says and that everyone has some principle by which they decide which verses apply in what way. Anabaptists, in particular, will resonate with McKnight’s overarching interpretive principle as Jesus Christ—the goal of the entire story and the means by which it moves forward and will one day be consummated.

Readers may not always embrace McKnight’s terminology—his designating the Bible’s individual books/sections as “wiki-stories” as an attempt to convey the idea that some writers felt free to take new turns in God’s unfolding story is difficult to stomach, and his metaphor of reading the Bible as sliding down a waterslide with tradition as one wall, the canon as the other, and the Holy Spirit as the water which propels us to our destination is weird but effective—but his overall approach to Scripture is a good one. It is honest and humble, and its message is a necessary one in a culture in which so many unhelpful understandings of what the Bible is and does (from both Christians and non-Christians) exist. Overall, it is a helpful book and worth reading.

From: Book Reviews, Church, Community, The Bible
← Christmas Challenge
Who is My Neighbour? →
5 Comments Post a comment