Searching for God Knows What 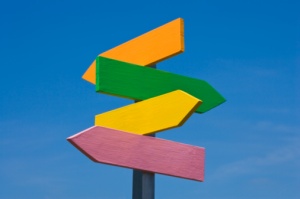 Last night at our young adults group we talked about, among other things, the frequently encountered view that Christianity is a strange relic of the past, that has nothing useful to say to us in the present, no normative force or existential/moral relevance in a world that has “grown up.” It is a well-rehearsed and often repeated story: once upon a time, primitive people thought there was objective meaning in the cosmos, we now know this to be false, and our only course of action is to salvage what personal meaning we can from the scrap heap of a random and chaotic universe.

Nobody used the word last night, and few people would probably frame the issue in a manner as sophisticated (and bleak!) as he did, but the name Albert Camus gave to our existential predicament was “absurd.” There is certainly much that rings true about in Camus’ writings about the human condition, but there are problems as well. The modern narrative of a “grown-up,” post-metaphysical understanding of absurdity is not without its inconsistencies and contradictions, either.

I dug out Charles Taylor’s A Secular Age this morning, and located this passage from his discussion of Albert Camus. I think Taylor highlights an important dimension of the discussion of where/if/how/why there is moral meaning to be found and embraced in our world: 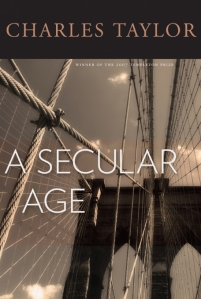 [Camus’] crucial move is to articulate the sense of the human condition, after the end of religious-metaphysical illusions, with the notion of the “absurd”… [T]he absurd is born of this confrontation between the human call and the unreasonable silence of the world…  We feel called to happiness, jouissance. This is not just a desire, but a sense that this is our normal condition; that this is what we are designed for. And beyond that, we feel an imperious demand in us to make sense of the world, to find some unified meaning in it. We have, in other words, an intuition about the meaning of things, written into our inescapable life experience.

But then the claims to fulfillment and meaning are brutally denied by an indifferent universe. It owes us nothing, and its operations randomly favour and then crush our aspirations. The nascent sense of meaning meets an enigma which defies an over-all meaning. The attempts at sense-making are continually and utterly frustrated. This is the contradiction which Camus names “absurd.”

Of course, there is a seeming contradiction in this claim itself…. If the point is that, contrary to Christianity and a whole host of metaphysical views, the universe is indifferent and void of meaning, it doesn’t make sense to speak of absurdity either. Absurdity exists where there is reason to expect meaning, and nonsense appears instead. How can there be an expectation of meaning in a universe which by hypothesis is devoid of it?

In short, why would we search for and be driven by something that is not and has never been available? It’s not an iron-clad argument for the existence of God, meaning, or anything else, of course, but it is a highly suggestive feature of human life and worth exploring, for apologetic as well as pastoral reasons.