This morning, I began teaching a kind of “Apologetics 101” mini-course at church. On the agenda today was the question of how it is possible to believe that Jesus is the way, truth, and life when there are so many other religious options out there. In other words, how do we affirm one perspective as true in a pluralistic context? Perhaps more importantly, how do we do so in an intelligent, curious, and sensitive manner that does not alienate and annoy people unnecessarily? It was a thoroughly enjoyable and thought-provoking class.

I didn’t use this quote in class today, but I could have because it reflects a few of the important themes we covered. This is from an essay called ” Be Particular” in Miroslav Volf’s Against the Tide: 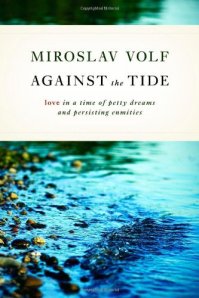 Religions are embraced and practiced in no other way except in their concreteness. To speak in a Christian voice is neither to give a variation on a theme common to all religions nor to make exclusively Christian claims in distinction from all other religions. It is to give voice to the Christian faith in its concreteness, whether what is said overlaps with, differs from, or contradicts what people speaking in a Jewish or Muslim voice are saying.  Since truth matters, and since a false pluralism of approving pats on the back is cheap and short-lived, we will rejoice over overlaps and engage others over differences and incompatibilities, so as both to learn from and teach others.