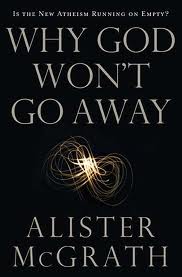 In the summer of 2006, I had just completed my first year at Regent College, and was looking for a few interesting summer courses to accelerate my degree. When I sat down to my first class with Prof. Alister McGrath on Christian Apologetics—a course that spent a lot of time on the ideas of Richard Dawkins—I had no idea that a few months later The God Delusion would hit the shelves, kick starting a half decade or so of fairly lively debate in the Western world on questions about the existence of God, the role of religion in public life, and the nature of belief.

I also had no idea that a year later I would be getting very well-acquainted with Messrs. Dawkins, Hitchens, Harris, and Dennett, during my Masters thesis attempting to locate the phenomenon of the new atheism as a response to the problem of evil.  I pulled the finished copy down from my bookshelf today, blew the dust off, and reflected on the ironic fact that sixteen months of my life and seemingly countless hours of research and writing resulted in this curious artifact with a blue cover bearing my name on it that perhaps less than ten people have actually read in its entirety. Such is the fate of these projects, I suppose.

At any rate, the new atheism has been back on my mind over the last week or so as I paged through Prof. McGrath’s latest apologetic contribution called Why God Won’t Go Away: Is the New Atheism Running on Empty? Of course, anyone with even a passing familiarity with the new atheism and the seemingly endless responses it spawned will be familiar with McGrath. He has written extensively on modern atheism (see here, for a start), and fairly directly in response to the “Four Horsemen” of the new atheism (Dawkins, Dennett, Hitchens, and Harris), whether through his books and articles, or on the debate circuit. He has become something of a “new atheism expert,” I suppose, so it’s not surprising to see that he is still at it.

McGrath has always been very measured and comprehensive in his approach to the new atheism. In such works as the unfortunately named The Dawkins Delusion, McGrath patiently and insistently pushes against the flawed understandings of the nature and task of science and reason, the history and motivations of human violence, and the nature and grounding of truth and ethics on display in the new atheist corpus. McGrath is good at this, and his books are, for this reason, a great service to the church or anyone who wants to wrestle with these kinds of issues and questions.

The only thing genuinely new about Why God Won’t Go Away, I suppose, is that it offers a kind of “where do things stand today” component. McGrath does a good job of taking our western cultural temperature, and assessing just how influential the new atheism is/has been. Not surprisingly, the picture isn’t a very flattering one for the new atheism. Whether it is the limited influence of atheist organizations such as the “London Brights,” or the intemperate infighting of new atheist blogs and websites (e.g., the controversy surrounding 2010 restrictions on the “Dawkins Forum” on the Web site of the Richard Dawkins Foundation for Reason and Science), McGrath argues that the new atheism is a phenomenon that seems to have enjoyed (and milked) its moment in the sun and is now mostly running on fumes.

At one point in Why God Won’t Go Away, during a chapter on the rationality of beliefs, McGrath has this to say:

Human logic may be rationally adequate, but it’s also existentially deficient. Faith declares that there’s more to life than this. It doesn’t contradict reason but transcends it. It elicits and invites rational consent but does not compel it.

I think McGrath is absolutely right. There may be more atheist salvos to come in the not-too-distant-future—from the “Four Horsemen” or others—but for my part, it is the “existential deficiency” of the new atheist worldview that has limited and will continue to limit its broader cultural influence. McGrath’s writing, whether his earlier work or this most recent volume, consistently and compellingly points to adopting a “thick” enough worldview to account for the wide range of beliefs, behaviours, questions and longings that matter to human beings.

I commend Why God Won’t Go Away, specifically to those new to the debate and controversy around the new atheism, but also to anyone looking either to better understand the new atheism as a cultural phenomenon, or to critically evaluate the new atheist vision of reality.

I received a copy of Why God Won’t Go Away courtesy of Booksneeze’s review program.