A God Who Plays Dead 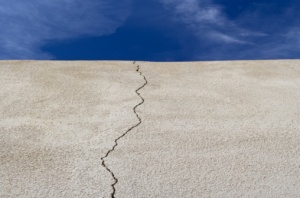 Now that I have started to jog periodically, I have done what all good joggers do: I have created a playlist on my iPod full of  bone-rattling, heart-pounding, anthemic rock songs to provide the requisite boost of adrenaline and inspiration once the legs start to feel like jelly, the breathing gets laboured, and the going starts to get pretty rough. For me, this takes place after about half a kilometre or so.

One of the tracks on my  playlist is a song called “Nietzsche” by The Dandy Warhols, which contains the following lyric:

I want a god who stays dead
not plays dead.

It’s a fascinating line—one that could allude to any number of points and experiences on the psychological/spiritual/philosophical landscape in postmodernity. God is dead, but God won’t away. We want nothing to do with God, but we can’t live without meaning and the hope of redemption. We cannot escape the shadow God casts.

A few weeks ago a friend sent me an interesting article by James Wood called “Is That All There Is?” In it, Wood is primarily concerned to evaluate a new book called The Joy of Secularism: 11 Essays for How We Live Now (which looks like an interesting read, incidentally), but he begins with a conversation with an atheist philosopher friend who admits to wondering, periodically, if it can really be true that there is no design, no metaphysical purpose to life. These are questions that atheists are not supposed to admit having, he says, but ones that haunts him nonetheless:

These are theological questions without theological answers, and, if the atheist is not supposed to entertain them, then, for slightly different reasons, neither is the religious believer. Religion assumes that they are not valid questions because it has already answered them; atheism assumes that they are not valid questions because it cannot answer them. But as one gets older, and parents and peers begin to die, and the obituaries in the newspaper are no longer missives from a faraway place but local letters, and one’s own projects seem ever more pointless and ephemeral, such moments of terror and incomprehension seem more frequent and more piercing, and, I find, as likely to arise in the middle of the day as the night.

Wherever one finds oneself on the atheist/theist continuum, it’s not hard to find oneself in these words. In fact, I would contest Woods’ portrayal of “religion” as some kind of a whitewashed space where all questions have been answered, and all doubts conquered. Even “religious” people experience the piercing moments Woods refers to, if my own experience is anything to go by. Religion is no inoculant against ephemerality, terror, and incomprehension. For every atheist that secretly wonders how there could not be a God, there are religious believers who secretly wonder how there could.

The world of our experience is ambiguous, it must be admitted. Some days God seems as close as our skin, and the hope and joy of a good world sustained by a good God seems self-evidently true and worth shouting from the rooftops. Other days it seems like we and our world are just a bunch of random molecules smashing against one another in a void of chaos and meaninglessness. Almost as if God is dead. Or playing dead.

It’s not always (or even often) easy to live in this conflicted middle ground, where these tormented questions refuse to recede quietly and obediently into the basement, where they rudely insist on putting their feet up on the couch and making a mess of the place. I suspect this is true for atheists, believers, and many in between.

Personally, I take comfort in the fact that the experience of the hiddenness of God is not a new experience (see Psalm 44, for example), and that this experience has long been located within the context of a commitment to God. Because at the end of the day, the most important question to me seems not to be “What rational explanation of the cosmos makes the most logical/existential sense to me?” but “Given the mixed bag of experience that I see all around me (and within me), to what (or to whom) will I commit?” These are not unrelated questions, of course, but framing it this way at least helps to isolate the crucial dimensions of volition and will and perseverance, in a world where all are like grass, where everything withers and fades away (Isa. 40:6-8).

Locating doubt within the context of commitment and fidelity to God does not magically make the piercing questions in the middle of the night go away, but it may just help us through them. And it may just help steer us toward the future of hope and promise, security and peace—the longing that lies beneath and animates our deepest questions.

From: Atheism, Culture, Discipleship, Doubt, Faith, Hope, Philosophy
← Back in Time
Something Has Happened… Now Listen to Me!! →
7 Comments Post a comment