The Scandal of the Cross—Take Two 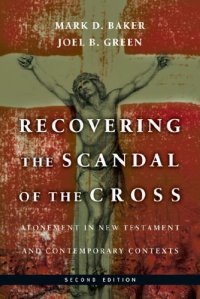 God’s self-giving goodness and his determined commitment to rescue and redeem his creation were demonstrated two thousand years ago on a Roman cross. This is the guiding conviction that animates Mark Baker and Joel Green’s exploration of the meaning and scope of the atonement in the second edition of Recovering the Scandal of the Cross: Atonement in New Testament and Contemporary Contexts.

Through careful biblical exposition, historical analysis, and philosophical reflection upon how language and metaphor work, Baker (a Mennonite) and Green (a Methodist) once again compellingly demonstrate the depth and breadth of meaning of the cross, the variety of metaphors that can (and must) be used to communicate this, and the missional possibilities this understanding opens up to and for the church.

In 2000, when the first edition of Recovering the Scandal, was published, the atonement debates in the evangelical world had not risen to the prominence that they would later in the decade. Baker and Green’s book, however, served as something of a lighting rod in parts of the Mennonite Brethren world in the second half of the 21st century’s first decade. Many felt that in arguing for the adoption of a variety of metaphors to communicate the saving significance of the cross, Baker and Green were going soft on sin, that they were downplaying the wrath of God, that they were diluting the gospel, etc.

As I read the second edition of Recovering the Scandal, I couldn’t help but ponder how grimly ironic it is that Christians tend so often to treat severely those who do not have a severe enough view of God. I cannot speak to how Joel Green was treated in his context, but during the opportunities I had to participate in denominational forums where Mark Baker was either present personally or where his book was being discussed, it was very disheartening to see some of the reaction (there were thinly veiled accusations of heresy, “liberalism,” infidelity to the gospel, etc). While gestures toward reconciliation have since been offered and received from both sides, I still regret that rather than looking at this book as an opportunity to thoughtfully reflect upon, clarify, and perhaps recalibrate our understanding of the cross as a conference, it often seemed like we were more interested in a trial of orthodoxy.

At any rate, readers of Recovering the Scandal, will discover that the authors’ views of the atonement do, indeed, fit squarely within the parameters of historical Christian orthodoxy. Baker and Green were and are quite clear that Jesus death is substitutionary (i.e., on our behalf) and that our sin is part of the problem that the cross solves. Their main target—in the first edition and, even more clearly, in this second edition—is the idea of the cross as wrath appeasement, as if somehow God were implacably hostile toward humanity, and that Jesus somehow saves us from this very angry God. So often some version of the above story is presented as the gospel without remainder. Baker and Green have again rightly wondered how this could be seen as good news for the whole world.

In the second edition of Recovering the Scandal, Baker and Green even more clearly and explicitly locate their view of the cross within the broader narrative of the story and the hope of Israel and, by extension, the story of the cosmos. An interesting addition to the second edition of this book is a brief discussion of Mel Gibson’s famous film, The Passion of the Christ as symbolic of our culture’s fascination with the brutality of Jesus’ death apart from its narrative context. In Gibson’s film, the authors argue, we are invited to a prolonged and heightened emphasis upon the suffering of Jesus apart from any coherent context to make sense of it:

The unchurched walk away stunned but puzzled. The churched walk away stunned as well, but secure in the knowledge that “he did this for me.” The question remains whether, having experienced Gibson’s Passion, we have heard the call to love of God and neighbor, to reconciliation of peoples, to care for the least and the lost, which is what got Jesus to the cross in the first place.

An emphasis upon penal substitution to the exclusion of all other theories of the meaning of the atonement can have a similar effect upon us. We look long and hard at the punitive severity of the cross, we marvel at the suffering Jesus endured and are grateful that this is somehow for our benefit, but have few theological categories through which to move beyond an understanding of the cross that goes something like, “Jesus was tortured and killed so I wouldn’t have to be.” The cross is seen as a one-off event that has a one-off effect upon sinful human beings (we are moved from the “guilty” to “not guilty” column in God’s divine ledger). It’s a bizarre, morally troubling, and far too small view of what the cross was and is about.

For Baker and Green, the cross of Christ is not simply about transferring the forensic status of individual human sinners; rather, it is about the cosmic victory of God’s defeat of evil, and our participation in the new life made possible by the work of Jesus. The cross deals with sin, certainly, but it also gives us a picture of a God who gives himself up for those he loves, thus empowering and emboldening us to do the same. It frees us to live selflessly, graciously, and generously toward our friends and our enemies. It frees us to love and forgive as a means of participating in the love and forgiveness that precedes, surrounds, guides, and strengthens us for the sake of the world God loves and forgives.

In both the first and second editions of Recovering the Scandal, Mark Baker and Joel Green have given us a biblically grounded, historically rooted, and existentially necessary picture of a good God who acts for good through the cross. A God for whom the cross simply represents an avenue for the redirection of divine hostility does not strike me as particularly good or worthy of emulation. A God who goes to the cross, who willingly lays down his life for the sake of a world he loves and invites us to live in and through the new reality this love makes possible is very good news indeed.

Thanks to Mark Baker, for providing me with a copy of Recovering the Scandal of the Cross for this review.