This past Sunday evening was our children’s Christmas program. It was a wonderful and wonderfully diverse production. From pre-schoolers playing “Silent Night” on hand bells to high schoolers’ strumming “Jesus Messiah” on electric guitars, to little Marys and Josephs in housecoats and shepherds and angels and botched candle-lightings and memorized poems and rousing renditions of familiar carols, it was a delightful collection of parts that contributed to a marvellous whole.

There’s nothing quite like children telling the story of the humble king sent to heal and forgive, to teach and save. Their enthusiasm and honesty and wonder and lack of pretense is infectious, inspiring, and instructive.  Jesus said that “anyone who will not receive the kingdom of God like a little child will never enter it” (Mark 10:15). Who knows, maybe the children’s Christmas concert is not a bad place to begin when thinking about how to receive our King and his kingdom.

Sunday’s Christmas program was still fresh in my memory when I read these words today from Stanley Hauerwas’s Prayers Plainly Spoken: 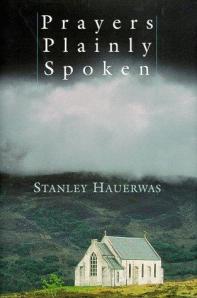 Dear God, our children are wonderful news: the news that you refuse to give up on your creation. Against the blackness of this world, against the injustice, against the violence, against the busyness spurred by our inflated sense of importance, you give us children. What a wonderful gift. We thank you for Adam, Sarah, Austin, Katie, Gabriel, Joshua, Paul, Thomas, Joel and others. Thank you for these your children, who screw up our lives, thus teaching us our true desires. Like your Son, they are our fleshly advents, because through them we learn patient hope. Thank you for making us your joyful, confident children, capable of welcoming our children, hopefully in imitation of your welcome of us. Amen.