A Labour of Vision

This morning, I read of Christopher Hitchens’ passing and felt very sad.

I did not know the man personally, of course, nor did I share many of his convictions about the world. Indeed, Hitchens spent a good deal of time and energy (articulately and entertainingly) attacking some of the things most important to me. But today’s news really hit me. It was kind of like hearing that a friend had died—or at least a distant cousin that you once stayed up late into the night having an intense conversation where you both got really worked up and ended up simply having to agree to disagree!

I suppose the one thing that I came to most appreciate about Hitchens over the course of my time spent with his work during the writing of my thesis a few years back was the strong element of moral protest that characterized his atheism. He expected better—from God, from religious institutions, and from those who claimed to have some divinely inspired insight into the nature and purpose of the cosmos. Very often, after reading another of his scathing passages, I would think, “yeah, you know he’s right about that… that shouldn’t be…. that doesn’t make sense… that is profoundly screwed up… why do we say/do that?” He held up an uncomfortable mirror to the religious, and in this sense he functioned, however ironically or unintentionally, as a prophet.

So, the news of Hitchens’ death combined with moving toward the last Sunday of Advent—this season of at times uncomfortable, expectant, and frustrated waiting and longing for God to come and finally fix our screwed-up sin-soaked world—has me thinking about what I see as the profoundly religious nature of protest. And about the necessity of hope.

On these themes, I am often drawn to a little book by David Bently Hart called The Doors of the Sea, written after the tsunami in December, 2004. It is a book that honestly and compellingly looks at the stark pain, waste, and horror of our world, that acknowledges the force—even necessity—of moral protest, and moves on to hope. I won’t dishonour the life and convictions of Mr. Hitchens by pretending that he shared or even admired this hope, but words like these sustain me during times when there seems so much to protest, so many reasons to be angry, so few grounds for faith: 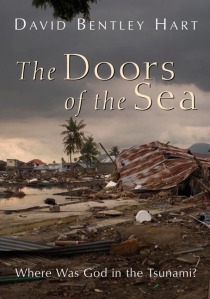 At such times, to see the goodness indwelling all creation requires a labor of vision that only a faith in Easter can sustain; but it is there, effulgent, unfading, innocent, but languishing in bondage to corruption, groaning in anticipation of a glory yet to be revealed, both a promise of a Kingdom yet to come and a portent of its beauty.

Until that final glory, however, the world remains divided between two kingdoms, where light and darkness, life and death grow up together and await the harvest. In such a world, our portion is charity, and our sustenance is faith, and so it will be until the end of days…. Such faith might never seem credible to someone like Ivan Karamazov, or still the disquiet of his conscience, or give him peace in place of rebellion, but neither is it a faith that his arguments can defeat: for it is a faith that set us free from optimism long ago and taught us hope instead.

From: Atheism, Books, Culture, Current Events, Death, Doubt, Ethics, Faith, Hope, Quotes, Religion, The Problem of Evil
← Children as Gospel
They Must Not Believe in God →
23 Comments Post a comment