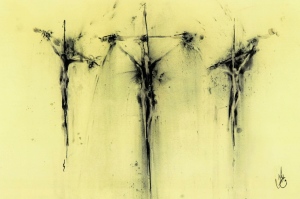 I’ve been thinking about the kingdom of God a lot lately. “Kingdom of God.” It’s a funny phrase, and one we use a lot—especially churchy people like me who have to get up and say things for/about God on a regular basis. We probably even have a decent enough idea of what it might mean—a new state of affairs where things are ordered rightly, where human lives and wills are finally in glad alignment with their creator, when peace and justice and harmony and love take the place of war and cruelty and greed and hatred. The kingdom of God is when things are as God intended them to be, when God repairs and redeems his broken world. Or something like that.

The kingdom of God is what we long for even when we don’t know we are longing for it.

Jesus proclaimed the in-breaking of this kingdom during his time on earth. And in his death and resurrection, Christians claim that this kingdom was decisively and irrevocably inaugurated. The kingdom is not yet realized in its fullness—that much is surely obvious!—but it is on its way. And while we wait we talk a lot about this kingdom coming. We point to signs of new life, to foretastes of this kingdom coming. At our best, we do more than talk. We love and we serve and we resist evil. We share the good news— in both word and deed—that the king has come, that his kingdom is coming, and that all are invited to be a part of the world being made new.

But it can be very difficult to see past the oldness to the newness. The oldness shouts louder and more belligerently  It overwhelms us and clouds our vision. It struts around with its elbows up in the air bumping into everything and knocking things around. It can be very difficult to see and participate in and hope for this new kingdom when there is so much oldness in the way. We are hungry for newness—hungry for signs that this kingdom is real and inevitable, that is strong and sure and true, but so often we are feeding on all-too-familiar scraps. Whether it is the large-scale suffering and evil that blares across our headlines, or the church being more preoccupied with rightness than love, or the relational breakdown and chaos that so many of us see on a daily basis, or the sad apathy of a culture that is amusing itself to death, or the state of our own hearts and minds which stubbornly cling to cherished sins and habits, it can be exceedingly difficult to believe that there is anything like a kingdom of goodness and peace steadily advancing in our world or in our lives.

The kingdom is coming, Jesus says. Pray for earth to match up with heaven!

You won’t see the kingdom coming, Jesus says. It can’t be observed that easily. The kingdom of God is a hidden thing that shows up among you, within you.

So which is it? Is the kingdom of God a concrete, political state of affairs that brings physical liberation and justice for all? Or is it a state of the heart—a new way of being in this kingdom of oldness? Is it good news for the physically poor and downtrodden or for the “spiritually poor?” Is the kingdom a tangible thing or is it a mystical reality? If it can’t be observed, how can we work for it? If it can be observed, why don’t we see more of it now?

I sometimes imagine what it would be like to ask Jesus these questions directly. He would probably respond in some enigmatic, baffling way. Maybe he would tell a story or something. Or ask me a question that was impossible to answer (at least without implicating myself!). He would certainly make it personal. But whatever he did, he wouldn’t just come out and answer the question directly. Jesus is frustrating like that.

However my hypothetical conversation with Jesus might go, I am very aware, on this Wednesday before the Friday and the Sunday that changed the world, that this strange kingdom is nothing that I can bring about. I can’t fix people’s lives. I can’t solve global hunger or war. I can’t reverse powerful cultural trends of secularism or make the church suddenly “relevant” in a context where people’s interest in God so often seems to be lukewarm at best, hostile at worst. Come to think of it, I can’t even get through a whole day following the Golden Rule! The kingdom of God starts small, I know… It has to.

The Friday and the Sunday, then. How desperately we need these days that show us what the king and the kingdom look like, and are the only possible way that the king and his kingdom will ever come among us, within us, on earth as in heaven.

The image above is titled “Man of Sorrows” and is part of a collection by Tim Steward. It is taken from the 2012-13 Christians Seasons Calendar.