“We Are From the Future”

It’s a bit of a dreary Friday afternoon on a number of levels. There’s a screaming southern Alberta wind outside my window which makes my head hurt just to listen to it. I’m fighting some kind of a cold or flu or something that has been a most unwelcome and miserable companion since Wednesday or Thursday. And then there is the steady trickle of bad news on the church front. A combative email from a church in our conference that has decided to leave because of supposedly incompatible views on the authority of Scripture (and the ever-present threat of others joining them). A notification from the school I obtained my graduate degree from of a 30% reduction in staffing (coming on the heels of the closing of another institution that I am connected to). And, of course, the omnipresent reality of the state of the church in the postmodern, post-Christian West, with many shrinking, aging, and dying churches. Of course there is good news out there as well—stories of vibrancy and creativity in the church, stories of new life and growth. But some days… I don’t know. Some days it’s easy to feel as if the gates of hell are on the fast track toward prevailing…

Of course it takes no skill or vision to be a pessimist. Anyone can wring their hands and bemoan the state of the church or the future of theological education. Far better to plant a stake in the ground and courageously articulate a vision for faith and life that transcends the trends and temperatures of this or that specific time and place. Like the following passage from Brian Zahnd’s Beauty Will Save the World. I am no seer—I do not know what the future holds for the institutions that have been instrumental in forming and shaping faith in Christ. I do not know what the church or theological education will look like 5, 10, 50 years from now. But I am absolutely convinced that whatever else the future holds, the world will always need this kind of witness. 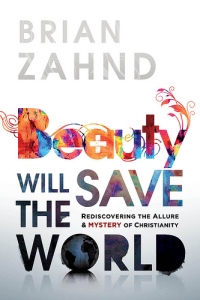 We are from the future. In a world being torn apart by hate and hostility, we are a prophetic witness to the peaceable kingdom of Christ. We reject a warring mentality because we believe and confess that Jesus has already conquered and is already reigning as Lord. “What is wrong with the world is most fundamentally that people respond to evil with evil.” Revenge doesn’t work. Because we believe that Jesus is Lord and rules the nations from the right hand of the Father, we see the temptation to respond to evil with evil and to violence with violence as unbelief and rebellion to the lordship of Christ.

We are from the future. In a world devoid of imagination and dominated by the way it’s always been, we are to be a prophetic witness to otherness and holy imagination. We reject the pretentious claims of the principalities and powers that the way the world is presently arranged is the way it has to be. The principalities and powers committed to the status quo say that poverty is inevitable, that war is unavoidable, and the exploitation of the weak by the strong is inescapable. But we refuse to acquiesce to all of that. Why? Because we have heard the song of the prophets. We have seen the vision that John saw. We have believed the gospel the apostles proclaimed. We have confessed that Jesus Christ is Lord. We have an imagination inspired by the Holy Spirit, and we believe in the world to come.

We are from the future. We are persuaded that the future belongs to beauty. Beauty will save the world. The beauty of Christ will save the world from the ugliness of greed, violence, domination, idolatry, and immorality. We believe this. So we seek to “behold the beauty of the Lord” and reflect that beauty back into our broken world. We do this in the hope that humanity will catch a glimpse of the beauty that is to be, believe in that beauty, and call upon our beautiful Savior.

The image above is from the 2012-13 Christian Seasons Calendar. It is a photograph called “Waiting” and was taken by Dan Sneep of a church near Kamloops, BC, Canada. According to the description in the calendar, it speaks of “the dynamic of God’s people in relation to the world, the unknown, and the future. The church is a people waiting in hope, a light in the darkness.”