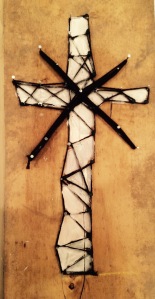 There was this radio program I was listening to today… They were interviewing some guy who was the executive director of a Christian relief organization who had spent decades in war zones and poverty and famine and disease… Some guy who had traveled around the world doing good in the name of God.

I was half paying attention when he told two stories. The first was about driving down the road in the aftermath of the Rwandan genocide, and seeing a four-year-old boy stagger out of the bush, malnourished, barely alive, having been without water for nearly two days. His parents and other family members had died. There was nobody with him. He was all alone.  Four years old.

The second was during the AIDS crisis in Tanzania. He talked about dead bodies “piled like cordwood” beside the feeding tent. They couldn’t be buried because the soil was largely ash. He spoke of one day seeing a woman walk up carrying her dead infant in her arms. He watched as she gently placed her baby on a pile of corpses on the back of a truck and turned and slowly walked away.

But yes, of course, they can, they do, they are, they have always been, and will always be. The world is a cold, dark place. These two snapshots are representative of horrors too many to begin to enumerate, around the globe, across time. For every one or two stories like this that see the light of day, that poke their heads into our affluence and comfort and force us to stare at them, there are quite literally countless others that do not. How many human beings—people with brothers and mothers, friends and neighbours—have suffered and continue to suffer completely anonymously? How many names and faces, forgotten, lost to the dull march of brutal time?

The executive director is talking again, as my head spins and my heart hurts. The little boy… The mother… Dear God… He’s talking about “providence” and about how his faith helps him deal with the “difficulties” and “challenges” of his job. He’s talking about how if God allowed his own Son to die the most awful death, then we surely should expect no different here in this life. And I know he’s seen more than I will ever see, and done more good than I will ever do, and that he is a man of deep strength and compassion, but what I want to say is, “NO, NO, NO! You can’t talk about “providence” or play the “Jesus suffered the most of anyone” card. No, those words simply won’t do. Not here, not now. Not when there are four-year-old boys staggering alone out of a war zone… And mothers with babies… Dear God.

Suffering is often thought to be one of the things that theologies and worldviews have to somehow “explain” or. And I suppose that’s true, on one level. But on another level, I don’t think this says enough. Suffering is not some piece of data that we have to fit into the stories we tell ourselves. It’s not one of the “challenges” to belief in a skeptical age. It’s not the next topic in the apologetics line-up, once we sort out theories of atonement and the historicity of the gospels. Suffering is a gaping, festering, wound at the heart of human existence. It indicts our pasts, haunts our presents, and threatens our futures. It is the question, the fact that any official story must wrestle with and fight and struggle against.

And, increasingly, I am convinced that if our “official story” about the ways of the world   and the ways of God could not be told to a four-year-old boy alone in the wilderness… a mother piling her dead baby on the back of a truck… Then it’s worthless. Better to shut our mouths and weep than to pile up useless words how God works and what God wants.

And yet, the executive director was right, wasn’t he? I wouldn’t put it the way he did, but there is a sense in which this is the only response that could ever be given from anyone who clings to Jesus. We will never be able to explain suffering. We will never get all the why’s sorted out. We will never know what God was thinking. But there is something about pointing to a God who is splayed out, gasping and dying on a wooden cross that, I don’t know, helps. Somehow.

There is something about this image, this basic fact of our faith, that reminds us that the horrors do not take place outside the life of God. Somehow, this God takes it all in—four year old boys… mothers… the innumerable suffering masses of history—and exposes the whole heaving, lurching, staggering mountain of pain as damnably false and contrary to what ought to be. Somehow this God on this cross bespeaks a day to come where the wrong will be judged, the wound healed, the incalculable misery forgiven and forgotten.

Behold, I make all things new!

A conveniently happy ending? Yes, certainly. But also, I think, what the suffering have always deserved. To not be forgotten. To be anonymous no longer. To be welcomed by God.  One big impossible story to make up for all the impossible stories that should never have been told.

The image above is a creation that my daughter recently made for me. She made it out of a discarded 2X6 in our alley, a handful of nails, some paint and a bit of yarn. I asked her why she made the X across the cross. Did she know about the Greek letter chi that so often stood in for the word “Christ?” No, she didn’t, she said.  But who knows?  Maybe she did.

There’s a splinter running up from the base of the piece of wood into the base of the cross. It threatens to break the cross in two. But not yet. The cross, and Christ upon it, still stand strong and true.

From: Death, Doubt, Eschatology, Faith, Hope, Jesus, Suffering, The Problem of Evil, Theology
← “We Are From the Future”
“The Devil Lost One of His Best Soldiers” →
10 Comments Post a comment