Death of a Simple Narrative 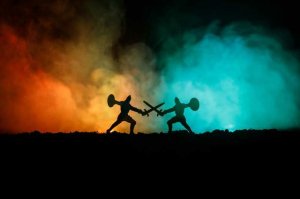 I am learning that the jail is very often a place where simple narratives go to die.

This morning’s lesson was ostensibly about learning how to stop blaming parents and take responsibility for our own actions but, as is usually the case, the conversation tends to meander off in all kinds of loosely-related or unrelated territory. There was a younger indigenous woman who was sitting quietly while the lesson was read. She had spiky jet black hair streaked with blond, a few tattoos on her face, one that looked like a tear drop of blood. I wouldn’t have been surprised if she sat in stony silence throughout our time together. She didn’t look like she had much to say.

Turns out, she did. Quite a lot, actually. And it wasn’t what you’d expect. It wasn’t what I expected, anyway. She talked about how she had miraculously forgiven her parents after attending a program which I won’t name but which sounded like (and probably was, I determined after a quick Google search later) one of those wild charismatic Christian programs that use phrases like, “capture back what the enemy has stolen” and “kill every satanic embargo” and “be victorious in your dreams at all times” a lot. She talked at length about demons and strongholds and spiritual warfare. She spoke about the importance of “being in the word” daily. She could recite bible verses better than many pastors I know. Certainly better than the one writing these words. God had turned her life around!

It got worse. Or better, I suppose, depending on your perspective. She triumphantly declared that she had destroyed all of her sweet grass and cultural regalia (she used to be a ceremonial dancer). Ditto for her all materials related to astrology and horoscopes. I half expected her to say that she had burned her secular rock and roll cassettes, as was the familiar ritual in the lives of so many evangelical teenagers when I was a kid. Listening to her felt like stepping into a weird combination of a Frank Peretti novel and a hyper-conservative charismaniac evangelical church from several decades ago.

Like I said, the jail is not a place for simple narratives. And this one was about as inconvenient as you could hope to find in our post-Truth and Reconciliation Commission Canada and post-residential schools church. A young indigenous woman walking away from her culture and toward a rather extreme form of the religion that has historically done so much to wound and oppress her people. Was this a weird enactment of a kind of cultural-religious Stockholm Syndrome? Didn’t she realize that she had things exactly backward?!

I thought of what my progressive Christian, agnostic, or atheist friends would think if they were sitting around the circle this morning. I could almost hear them gasp with horror. There were times when I found it difficult to listen to! Surely this was an example of a vulnerable young woman being taken advantage of by opportunistic preachers and greedy religious snake oil salesmen. Surely this was another tragic example of the oppressed grabbing on to the categories of their oppressors in the absence of better narratives—another ugly tributary of the rivers of colonialism that had washed over her people. And she was, not to put too fine a point on it, back in jail. So, you know, how well was this brand of crazy Christianity actually working for her?

But there’s a fine line between compassionate understanding and condescending paternalism, isn’t there? Would we really want to find ourselves in the position of saying that whatever this young indigenous woman thought was going on in her life, her experience, and her faith, that we (mostly white, mostly well-educated people) knew better? Would we really want to draw the boundaries for her with respect to what real indigenous expressions of spirituality, healing and wholeness look like? Would we want to deprive her of agency in this way? Would not this rather be yet another form of colonialism—non-indigenous people dictating the terms of what indigenous faith and practice ought to look like (or, more specifically, not look like)?

I noticed something else this morning, and most mornings I spend at the jail. When I start talking about God and faith in my usual highly nuanced, careful, non-supernatual, liberal-ish ways, the women usually smile politely, ask a few questions, offer a bit of qualified appreciation. But when one of their fellow inmates starts talking about angels and demons and punching the wall to get Satan out of their room and screaming the name of Jesus to chase the bad dreams away and tearing down strongholds and deliverance and victory, then the heads start nodding a lot more enthusiastically. They have little time for mushy, tolerant, understanding Jesus—they need Christ the victor who exorcises the demons and shatters the chains.

I resonated with very little of this woman’s experience and testimony this morning. I cringed throughout her (long) telling and could have picked it apart theologically in any number of ways. And, again, for all her talk of radical new beginnings in Jesus she was still sitting in a circle of plastic chairs in the prison chapel on a Monday morning, so… Well, so what? She claimed that Jesus had helped her to forgive her parents for abandoning her, that Jesus had set her free from addiction, and that Jesus had given her meaning and victory in her life. And for all my theological erudition (real or imagined), I haven’t walked a single step in her shoes. I have no idea what she has endured, no idea what she has left behind, no idea what she has already conquered or what roads she has yet to walk down. I have no idea the ways in which Jesus has come to her or the ways in which she has found him powerfully faithful.

So, not to put too fine a point on it, I should probably take my liberal-ish theological superiority and shove it. Or at the very least remain sensibly silent.

Simple narratives die in the jail. Sometimes, it’s because they should.

From: Faith, Forgiveness, Indigenous Issues, Jesus, Pastoral Ministry, Race, Spirituality, Stories on the Way, The Jail, Theology
← When the Water is Troubled
The Filthy and Excessive Gospel →
4 Comments Post a comment