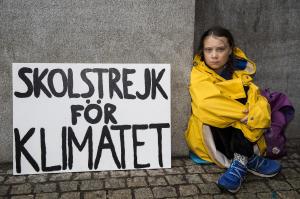 Like many, I’ve been following with interest the story of Greta Thunberg, the sixteen-year-old Swedish climate activist whose words and actions have been galvanizing young people (and beyond) and dominating the news in recent days. Hers is a voice that speaks clearly and forcefully for a generation that is sick of platitudes and political inactivity when it comes to the looming climate crisis on the horizon. She is unafraid to speak fearlessly to the rich and the powerful—to demand action for the sake of future generations who will pay the price of the reckless and wasteful inattentiveness of we who preceded them.

I admire Greta Thunberg. Her courage, intelligence, and breadth of knowledge are impressive (particularly for one so young), and her message of political accountability and meaningful change is a welcome one. In general, I require little convincing that rapacious human greed, self-interested apathy, and predatory capitalism are having devastating ecological effects. These things are corrosive to our souls, relationships, and communities; I would expect them to have the same effect upon the created world. And they clearly do. Thunberg’s voice could well turn out to be a catalytic one for our time and place, directing us to live more gently and responsibly on this earth. I hope so.

My interest in Greta Thunberg extends beyond her person and her message, though. I’m also fascinated with how these things make their way out into the world—how they are shared and used as symbols in our public discourse, how they are recruited into the service of other projects, not least that of creating and maintaining narratives of purpose and meaning. Thunberg might urge us to “just let the scientific facts speak” but we humans are stubbornly unable or unwilling to do this. We have little use for facts absent a narrative to give them meaning. So it seems to me, at any rate.

I was reminded of this, perhaps ironically, while reading Slovenian philosopher Slavoj Žižek’s breezily titled recent piece in The Independent called “Yes, it is a climate crisis. And your tiny human efforts have never seemed so meagre.” One does not read Žižek expecting cheery optimism, I suppose, and one’s expectations would have been squarely met in this piece. In general, Žižek gives the impression that all of our frantic hand-wringing about climate change is more or less useless. What will be will be. We are pitifully small, stupid, and selfish creatures, and there’s not much we can do to affect something as big as climate change. The truth of the matter, Žižek says, is that human beings will likely be “reduced to a purely passive role of impotent observers who can only sit and watch our fate.” Ok, then. Let me just reach for that reusable straw…

Not everyone agrees with Žižek, of course, and perhaps we should be thankful for this. Even if he is right, it would be better and more hopeful to listen to the Greta Thunbergs of the world. But I think Žižek absolutely nails one important truth about how our collective discourse about climate change—what he calls “the ecology of fear”—functions in the post-Christian West:

This ecology of fear has the hallmarks of a developing, predominant form of ideology in global capitalism, a new opium for the masses replacing the declining religion. It takes over the old religion’s fundamental function, that of installing an unquestionable authority which can impose limits.

There is nothing quite like existential fear and dread to foster compliance, after all. And Žižek would hardly be the first to state (or imply) that scientists are the priests of the secular age. They interpret reality, mediate meaning, and manage fear (at least in public perception). We look to them for salvation and hope. We do not magically stop hungering for these things once we leave religion behind.

But Žižek goes further. It’s not just fear but guilt that fuels the narrative:

The predominant ecological ideology treats us as a priori guilty, indebted to Mother Nature, under the constant pressure of the ecological superego agency which addresses us in our individuality: “What did you do today to repay your debt to nature? Did you put all your newspapers into a proper recycling bin? And all the bottles of beer or cans of Coke? Did you use your bike or public transport instead of your car? Did you open the windows wide rather than firing up the air conditioning?”

The ideological stakes of such individualisation are easy to see: I get lost in my own self-examination instead of raising much more pertinent global questions about our entire industrial civilization.

The ecology of fear, it seems, trades in precisely those things that bolstered so many toxic forms of religious expression over the years and have driven many away from the church: fear and guilt. I’ve lost track of the number of times, over my eleven years as a pastor, when someone has told me they have no use for religion or Christianity because it’s all about fear and guilt. Even while I disagree with this assessment, it is about as common a story as you could hope to find. And yet fear and guilt are not, it seems, so easily or seamlessly eradicated, whether from our individual consciousness or from our hunger to create and locate ourselves within narratives of meaning. They are so very useful, after all. And we are so very primed to embrace an understanding of the world that tells us what we should fear, why we should feel guilty, and what we should do to atone for our sins.

None of this, of course, means that we should not take warnings like Greta Thunberg’s seriously. Not by any stretch. We can and we must become better stewards of the created world, whether for pragmatic or theological reasons (or both). We can and we must ask hard questions of the economic and political systems we have created and the effects these are having upon the planet and upon vulnerable populations affected by climate change in ways that wealthier populations are not. These are essential questions for people of all faiths—religious or secular—to wrestle with.

But it is interesting isn’t it? We can’t quite stop being fearfully religious (or religiously fearful). It seems to be how we are wired.