Whatever Makes You Feel Better

A thought experiment for your Tuesday afternoon.

Scenario A: You’ve been experiencing pain. Maybe it’s arthritic knees or chronic migraines or the fallout from an injury. You go to your local clinic. The building is sterile and clean. It is filled with all kinds of humming machines, urgent activities, and the myriad accoutrements of a modern, technologically advanced health care facility. Your doctor is well-groomed and wearing a white lab coat. On her office wall hang impressive-looking degrees from prestigious universities. She analyzes your symptoms, perhaps does an X-Ray or an ultrasound. Images are produced, diagnoses pronounced. Your doctor writes a prescription on official letterhead and sends you off to the pharmacy where you encounter a few more white lab coats, a bit more buzzing technological efficiency. Eventually, you depart with a sealed bottle of pills with detailed instructions on the label.

Scenario B: Same pain as in Scenario A. This time, a friend tells you that he knows a doctor who sells cheap meds as a kind of side-hustle. You make your way to an abandoned warehouse on the outskirts of town under the cloak of darkness. The doctor shows up wearing a dirty white Led Zeppelin t-shirt and ripped jeans. He has a cigarette hanging out of his mouth and reeks of cheap booze. He doesn’t ask you any questions about your pain. There are no X-Rays or ultrasounds. There is nothing technologically advanced or sterile or scientific about any of this. He slings you a plastic bag full of pills in exchange for a wad of cash and sends you on your merry way.

The chemical composition of the pills is the same in both stories. They are identical pills. In which story would you imagine that the pain would be more effectively relieved? 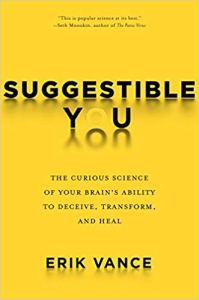 The answer is obviously Story A. And this is borne out by the research, according to science writer Erik Vance, author of Suggestible You: The Curious Science of Your Brain’s Ability to Deceive, Transform, and Heal. The preceding thought experiment is a more elaborate version (and one involving considerable artistic license!) of a scenario Vance ponders in a recent episode of On Being called “The Drugs Inside Your Head.” The “placebo effect” is real, Vance says. Human brains are “prediction machines”—we extrapolate into the future based on what we’ve experienced or observed or been told in the past. Our brains can’t help themselves—we are storytellers, through and through. And so, we tell a story about the pills—a story about science and progress and technology and education and biology and chemistry and human bodies and beings and who is qualified to do what and what, ultimately, is trustworthy. It’s a story where we know the lines for white lab coats and science and progress and where ripped jeans, the smell of cheap booze, and abandoned warehouses are decidedly unwelcome.

And the story we tell ourselves is, at least to some degree, what seems to relieve the pain.

(That “to some degree” in the preceding sentence is really important. There are limits to the placebo effect, obviously. The brain seems to be able to mitigate some pain on its own, in certain circumstances, but it can’t cure cancer or Parkinson’s, no matter what some enthusiasts or charlatans might want to claim!)

I’ll come right out and say it. I don’t like all this. I don’t want this to be true. I don’t like the idea that my body can be tricked into “healing” itself. I think that if the pills work, they should work, whether they come from a shiny, sterile office full of respectable looking people or from a grungy warehouse and a shady-looking character. The scientific fact of the matter should trump my expectations or preferences. This is all entirely too fuzzy and manipulable for my liking. I like white lab coats and MRIs and sealed prescription bottles very much. Things should either be objectively true/effective or not. Yet this doesn’t seem to be how things work. This doesn’t seem to be how we work. What seems in fact to be the case is that the pills work. Sometimes. Sorta. And depending on the story we’re telling ourselves along the way.

There’s another reason I don’t like all this. When it comes to how easily our brains can be swayed, it’s not at all difficult to extrapolate beyond pills and pain. If the story we tell ourselves, the expectations we’ve settled on, and the parameters of possibility we’re willing to accept are a big part of whether or not something “works,” what does this say about how we inhabit our ideological worlds of politics and religion and ethics? It’s no secret that the stories we tell ourselves in these domains are a big part of their ongoing maintenance. Much as we might prefer to think that we accept this or that view about race or gender or politics or science or religion or explosive topic x because it’s “objectively true,” in our more honest moments we know that we tend to overvalue evidence that supports what we already think/believe and to undervalue evidence that would undermine it. The facts tend to fit the stories we want to tell. This is just who we are and how we work.

Yes, we are storytellers, through and through. What we want to be true plays a far larger role in what we believe to be true than most of us are prepared to admit. And the correlate of this is also true: what we don’t want to be true, what we’re afraid of and dread, also has a profound effect on what we believe. This is what is called the “nocebo effect” (in medicine, the belief that something will have a negative effect will often play a role in bringing out precisely that effect, even when the treatment is inert). It would be interesting to run our interminable political and religious conflicts through the “nocebo effect” grid, wouldn’t it? I wonder how much of what we believe to be true and what we hang our very identities on has at least something to do with what we want not to be the case?

I suppose the long and the short of it is that reality is rather complicated. And we humans are complicated. There’s far less that’s “objective” about human experience and thinking and acting in the world than we might prefer. Our wanting is a rather significant feature of who we are (which is theologically fascinating, if terrifying under certain circumstances!). And far more often than we might like to admit, we’re reacting and responding and deciding and pursuing and defending and attacking and hoping based on a rather simple (and not-terribly-flattering) criterion: Whatever makes us feel better.