I’ve had a few hard conversations over the last week or so. Conversations about death and dying and despair, about the absence of God, the uselessness of God, the silence of God, the bleakness of the post-Christian landscape where hope, like every other good thing, must be manufactured by us if it is to be found at all. There are days when I would rather not be in God’s PR department.

These conversations often send me rummaging through my bookshelves, hunting around for sticky notes and dog-eared pages and underlined phrases, desperate for some good words to remind myself and those around me of how and why we could ever believe any of this preposterous stuff about a God whose defeat of death has already begun and will one day be fully realized. Today, I landed on this passage from Dale Allison’s beautiful book Night Comes: 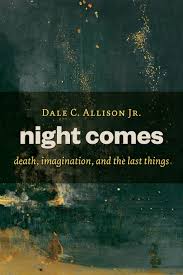 John Donne famously wrote: “Any man’s death diminishes me.” Speaking for myself, anyone’s death diminishes God—unless, that is, there’s something more than this vale of tears. If the brooding grave is everyone’s finale, if existence runs out into pitiless nothing, if nihility is everyone’s telos, then the forgotten and marginalized will remain marginalized and forgotten for all time. What good is God to them?

I at least need a God whose love and rule don’t leave us alone with our greatest existential evil, a God who descends into hell to rescue the dead. I need a God who places heavenly crowns on the heads of the slaughtered infants of Bethlehem. I need the God of the old Roman catacombs, which are full of scenes representing delivery from death—Noah’s ark, the sacrifice of Isaac, Ezekiel’s valley of dry bones, the three youths in the furnace, the raising of Lazarus.

Maybe some, for whom life hasn’t been solitary, nasty, brutish, and short but rather enjoyable, happy, wonderful, and long, don’t need such a God. Maybe they’ve reached their goals and can rest content. But the fortunate few don’t represent the less fortunate many; and that some of us, like the Sadducees of old, are happy to live and die, doesn’t entail that everyone else should buck up and feel the same way. Shouldn’t it distress us, if we’re not self-contained, that most haven’t been as lucky as Hume, while countless others haven’t even had the chance to set goals, or have seemingly done little more than suffer a thousand plagues of pain, with death their only escape? Do their circumstances make any difference to God, and will God make any difference to them? Is God the everlasting bystander, so that deism is forever true? Are we all like the prophets of Baal, who called on the name of their god again and again, but there was no answer?

After Gollum and the great ring of power fall into the fires of Mount Doom, Frodo and Sam sit on a little ashen hill. As lava rises around them, Frodo speaks the obvious: “An end comes. We have only a little time to wait now. We’re lost in ruin and downfall, and there is no escape.” The two friends then slip into unconsciousness. But that’s not the end. The eagles come, and the hobbits are borne away to safety. Later, when Sam awakens and sees Gandalf, he gasps: “I thought you were dead! But then I thought I was dead myself! Is everything sad going to come untrue?”

There must be some analogue to this scene in the universal human story. If not, then the cosmos is finally apathetic, and death can separate us from the love of God; and if that’s so, then love doesn’t endure all things but finally fails. Which cannot be.

From: Death, Doubt, Eschatology, Faith, Hope, Love, Pastoral Ministry, Quotes, Suffering, The Problem of Evil, Theology
← Don’t Just Stand There, Say Nice Things to Me
The Pain of Getting Well →
No comments yet