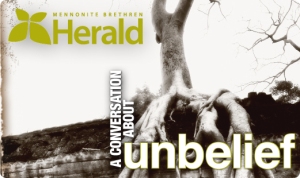 I’m a little all over the map this morning, but here’s a few loosely connected thoughts/reflections about unbelief on a Monday morning…

This month’s issue of our denominational magazine, the MB Herald, is about atheism/unbelief and contains an article by yours truly. It is a bit of a hybrid piece—a discussion of the new atheists (Hitchens, Dennett, Dawkins, Harris), a reflection upon conversations with a friend (no stranger to regular readers of this blog), among other things. Based on what I’ve read of the issue thus far, there are a number of articles and features definitely worth checking out.

Over the last few years it’s been very interesting to observe the number and variety of responses to the new atheists that have been published. It’s been almost enough to feed a small publishing house all by itself! I recall that when I was still researching and writing about the new atheists I could barely keep up with all of the books being written about/against this phenomenon. It seemed like every couple of weeks a new one came out, and it doesn’t seem to have slowed down (see here, here, and here for just a handful of the more recent ones). As relieved as I was to be finished my thesis in 2008, I was almost as glad to not have to keep up with the stream of rhetoric on both sides of the God divide. 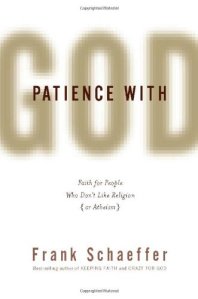 Nonetheless, I have maintained an interest in the issue and have continued to pay attention, even if only from afar, to how the debate is unfolding. A few months ago, I received another book that would fall into the category above. Frank Schaeffer’s Patience with God doesn’t just take issue with the new atheists, however. According to his subtitle—”Faith for People who Don’t Like Religion (or Atheism)”—he has both sides of what is becoming an increasingly polarized debate in his sights.

I confess to feeling somewhat ambivalent about this book when I finished it a few weeks ago. On the one hand, Schaeffer does a decent enough (if predictable, by now) job of poking holes in the arguments of the new atheists. There is very little that is remarkable about his critique of Dawkins, et al. Like many others, he sees them as sharing many features of the religious fundamentalism they so stridently oppose. Like many others, he criticizes them for failing to engage with any kind of substantive theology. All this is fine, as far as it goes.

However Schaeffer also expends considerable energy (and ridicule) distancing himself from his evangelical past (his father was Francis Schaeffer, well-known Christian pastor, author, and founder of L’Abri). His critique of the beliefs of his own family and the nature of their “indoctrination” of him gets a bit tiresome, at times. He seems just a bit too desperate to prove that he has moved beyond all that fundamentalist Christianity stuff, just a bit too eager to demonstrate that he’s not like all those ignorant religious literalists that the new atheists attack. Throughout the book, his tone can be annoying, whether he is talking about his own Christian heritage or the new atheists.

If the two fundamentalisms—the new atheists on the one hand and the blinkered evangelical fundamentalism represented by his parents—are equally unacceptable and worthy of scorn (in Schaeffer’s view), what is the alternative? Where has Schaeffer landed in his journey? Well, it seems that he has found a home in the Greek Orthodox Church and various streams of apophatic theology. He has found refuge in an unknowable and mysterious God about whom very little can be said. Here are a few samples:

This theology takes a mystical approach related to individual experiences of the Divine beyond ordinary perception. It teaches that the Divine is ineffable, something that can be recognized only when it is felt, then remembered. And therefore all descriptions of this sense will be false, because by definition the experience of God eludes description.

Some days I know life has no ultimate meaning. Other days I know that every breath I take has eternal meaning. I also know that I’m crazy to believe these two opposites simultaneously. I’d feel even crazier denying them. I believe that both statements are true. Like that particle in a physics experiment, I am in two places at once.

On one level, retreating into the unknown as a refuge from dogmatic Christians or atheists is entirely understandable. Dogmatism is certainly unpleasant, wherever it is found and Schaeffer is clearly a person who has been wounded by dogmatism. But at times he seems to (dogmatically?) advocate the embrace of mystery, suffering, emptiness, and unknowing as somehow virtuous things in and of themselves or, at the very least, indicators of the right kind of faith.

It seems to me that if in Christ we have the image of the invisible God (Col. 1:15), then there are a lot of things that we can say about God, humanity, and the state of a world in which the kind of divine intervention we see in Christ is necessary.

As I read the New Testament, I do not get the sense that Jesus is trying to convince people of the apophatic nature of God. Jesus’ earliest followers were convinced that through this Galilean, the God of Israel was acting to vindicate his people and triumph over evil. These people had clear ideas about what their God had promised, what the fulfillment of these promises would look like, and the moral character of the one who made the promises. The fact that they didn’t understand all of these things perfectly does not change the fact that they saw a clear linkage between loving obedience, and the divine redemption and vindication of their people

This idea that God wants us to abandon all of our conceptions of him and be content to revel in mystery seems to disregard or ignore the fact that God has made himself known in the figure of Jesus, and that from this point on the world is a different place. Of course we do not cease to be limited human beings who do not see and know everything, but part of what it means to affirm some of the ridiculously counter-intuitive claims of Christianity is having the courage and the confidence to insist that things changed when God became a human being.