In Defence of the Church 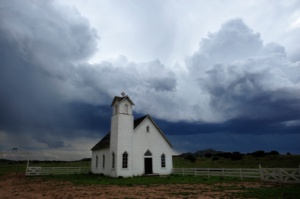 One of the questions I have come to dread over the years is the “so what do you do for a living?” question.  It’s not that I am ashamed to be a pastor, it’s simply that very often the discovery that I am “religious” can be something of a conversation-stopper.  Pastors are strange creatures, to be sure, and many people seem unclear about what to do when encountering one outside of their natural habitats (i.e., a church).  At the very least, disclosing that I am a pastor often makes the conversation instantly stranger, as people either a) hastily and awkwardly change the topic; b) begin to laboriously and not altogether coherently demonstrate how they are religious too; c) explain why they don’t go to church anymore; or d) stop talking altogether.

Option b was the preferred one this weekend at the hockey rink where the above scenario played out.  At first my interlocutor seemed genuinely puzzled to discover that I was a pastor.  Whatever her conceptions of this strange category of humanity may have been, I clearly didn’t fit the bill.  Nonetheless, the questions began to come thick and fast: “So, are you like, Christian?”  “Is Mennonite the same as Mormon?”  “Are you allowed to drink?”  After establishing a few of these baseline parameters, she proceeded to tell me that she wasn’t “religious” but she was “spiritual.”  She believed in science and tolerance and liked a place called the “Centre for Positive Living” where they did yoga and discovered how we are all connected.  She thought it was cool that I was a pastor but, for her, the church was clearly yesterday’s news, swept aside in the sea of relativism, science, and general positivity.

I’ve had other conversations over the last few days where similar themes of negativity toward the church come out.  The church is full of hypocrites, it doesn’t accept me, it is judgmental, it is boring and irrelevant, it is anti-science and outdated, it is more interested in maintaining an institutional structure than it is with encountering the living God.  The litany of exasperation and impatience and “fed-up-with-it-ness” goes on and on.  To whatever extent “the church” can be spoken of as a monolithic entity, it surely cuts a rather beleaguered figure in the postmodern wasteland of Western culture.

Truth be told, I resonate, at least in part, with many of these sentiments expressed in recent conversations.  The church has much to be ashamed of.  Her sins are so well-rehearsed that there is little point in repeating them here.  Grace and acceptance are often rare commodities in the very places where they should be automatic.  So often, rather than providing a foretaste of the kingdom of God, the church simply leaves a bad taste in people’s mouths.  Often when people complain about the church, I simply find myself nodding in agreement.  There is little to be gained, after all, in defending the indefensible.

But lately I have also found myself growing somewhat impatient with people’s impatience with the church.  It’s easy to pile on to the church these days, and quite fashionable too.  From the bestsellers lists at bookstores to the free-for-all that is the blogosphere to conversations at the rink, there seem to be a virtually endless amount and variety of anti-church rhetoric, people virtually queuing up to demonstrate their intellectual and moral superiority to the church and its people, these fossils of a bygone age.

Too often, though, the perceived or real failures of the church are simply a way to avoid honest engagement with either the ideas or the history of the church and its role in Western culture.  Too often, a vague sense that the church is bad prevents anything like a genuine attempt to learn more about the story the church claims to tell and what this story might have to say to and for our own stories.  It’s always easier to be against something when that something is understood poorly or presented in caricatured form.

More importantly, though, the sins of the church provide a convenient excuse to avoid dealing with the claims of Christ, the questions he asks of us, and the call he extends to die to ourselves, to risk commitment to God and neighbour—to line up with other sinners and hypocrites at the trough of grace, and together learn of fear and failure, sin and salvation, mercy and truth, and a forgiveness and hope that transcends all of our failures, religious or otherwise.

“On this rock I will build my church, and the gates of hell will not overcome it” (Mat. 16:18).  Jesus’ famous words to Peter remind us that the nature and mission of the church do not, finally, depend upon our ability to correctly implement the reality of the kingdom of God.  If even the gates of hell will not overcome the church, then presumably neither the stumbling and misguided efforts of the faithful to keep the story of Christ alive in these cynical times nor the skepticism and suspicions of the jaded and uninterested are up to the task either.