Be Kind to Each Other 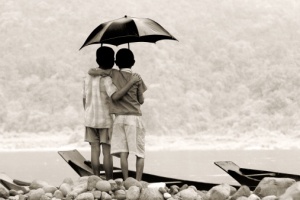 I listened to the story of a gay man yesterday. It was a story both tragic and tragically typical. It was a story of knowing he was “different” from his very earliest memories, of being mocked and ridiculed throughout his school years, a story of confusion, anger, and pain, a story of desperately trying to come to terms with an identity that just didn’t fit, a story of a string of unsatisfying relationships, a story of isolation and deep loneliness that persists to the present day.

It was also, of course, a story in which the church played a role. I wish I could say that it was a positive role—that the community that bears the name of the Friend of Sinners had provided a place of refuge and peace for this person… I wish I could say that. But I can’t. We all know that this isn’t how the story usually goes. We know that “rejection” and “guilt” and “judgment” and “fear” and “misunderstanding” are among the words that appear at this point in the story.

I had lunch yesterday with a denominational representative. Among other things, the “issue” of homosexuality came up (I hate using the word “issue” to describe real human beings, but I suppose we are always bumping up against the limits of language…). Like many denominations past and present, Mennonites are currently wrestling with how we are to think about and relate to the LGBT community. And like many (all?) denominations, there is a broad range of opinions on the matter, many of which came up over lunch. We talked about affirmation vs. inclusion, about biblical interpretation, about how far we could or should go, about same-sex marriage and the ordination of clergy, etc. It was all very familiar ground and, quite obviously, we didn’t “solve” anything in an hour over pizza.

I like theology. And I like being right. I like these things more than I should, undoubtedly. But as I reflect upon these two conversations from yesterday, I find myself asking not, “What ought the church’s position to be when it comes to homosexuality?” but a rather uninspiring and un-theological, “I wonder why we can’t just be nice to each other?” Perhaps this sounds like a cop-out or like I am being irresponsible as a “church leader” who is supposed to pronounce upon these matters. I don’t know.

The older I get, though, the more I am convinced that so many of the problems that face us could be solved or at least ameliorated by simply being kind to one another. Even a quick survey of my ordinary yesterday makes this plain:

The list goes on and on. How desperately we are starving for just a bit of human kindness in our world.

1 Corinthians 13 must surely be one of the most over-quoted and under-practiced passages in all of Scripture. “Love is patient, love is kind…” Love is kind. We could stop right there and have more than enough to keep us occupied for a while. Love doesn’t mock or ridicule or belittle. Love doesn’t exalt the self or the rightness of one’s opinions or doctrines. Love doesn’t sneer and snicker and deliberately misrepresent. Love is not arrogant or self-righteous or rude. Love bears all things, believes all things, hopes all things, endures all things.

What kind of reputation would the church have if we truly believed that Paul’s words in this passage were to govern our every human interaction? What would our communities look like if this was our starting point as followers of the Crucified One?

If the people who bear the name of the One who truly loved like this had always been committed to acting like this, I wonder how many gay people would be telling stories like the one I heard yesterday? I wonder how many times we would be hearing things like, “I’m still recovering from the gracelessness and unkindness I experienced at church after I came out” or “The church piled just guilt upon confusion and uncertainty” or “I’ll never set foot in the church again” or “______?” I wonder how gay people would feel about the church if we were as committed to a 1 Corinthians 13 kind of love as we were to having the right position on an issue?

One of the best things about following Jesus—I truly believe this—is that we are set free to simply love people and to be kind to them. We don’t have to be afraid of them, we don’t have to “fix” them, we don’t have to change them, and we certainly don’t have to try to make them look more like us. In fact, we’re not supposed to do any of this. Rather, we are simply set free to love our neighbours as Jesus loves us and to invite them to participate in this love. But this gift of freedom is one that we don’t always understand or appreciate or even want.

Love is patient, love is kind…

If we, as followers of Jesus, don’t learn and live this basic truth about the very heart of reality, I suspect we will come before the throne of God at the end of days weighed down with our shiny artifacts of “rightness” and “purity” and “doctrinal precision” and God will smile with pity on us and say something like, “That’s a very nice noisy gong you have there… a very interesting clanging cymbal. But I wish you would have been kinder to each other.”