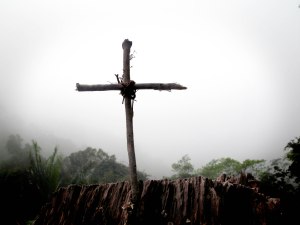 Last week I was hunting around for some music to listen to while preparing my Sunday Easter sermon. It was Holy week, so I thought I should try to find something a bit more inspirational than my usual fare. Perhaps some classical music. I don’t typically listen to classical music and know next to nothing about it. But, as I said, it was Holy Week. Mumford and Sons or The Lumineers didn’t really seem up to the task. Also, I thought that listening to classical music would have the happy effect of making me seem a bit more culturally sophisticated than I in fact am.

I went to CBC Music’s website and surveyed my options. I was presented with two Easter choices for Holy Week. How delightful! I read the description of each:

I started to experience a few cynical rumblings in my jaded soul.

I halfheartedly clicked on the first one. I listened for about four minutes before, I must confess, I gave up, my spiritual journey not feeling particularly enhanced, my heart not filled with anything resembling a joyous aural celebration. I am, apparently, not cut out for classical music. But it wasn’t just my lack of cultural sophistication that led to my lukewarm appreciation of the musical fare.

Outside the church, this is obviously true. We live in a secular age that retains only the wispiest strands of incoherent Christian residue. But I think it’s true inside the church, too. There are many Christians who approach Easter thinking roughly in these terms. It’s a pleasant enhancement to our spiritual journey. Or an opportunity to meditate. It gives us peace of mind. It’s a nice metaphor for new life and flowers and sunshine and the possibilities of springtime.

We often hear poetic language about how Jesus was raised “in the hearts of his disciples” but we really shouldn’t take these things so literally. The resurrection has become part of the furniture of religion, something we either reduce to an inoffensive springtime metaphor or consign to the dusty attic of our faith, tucked away, no longer able to astonish us as it ought to.

I have nothing against springtime or peace of mind or meditation or flowers. I can even (barely) tolerate language about “enhancing our spiritual journey.” But these things are manifestly not what Easter is about.

Easter is about the jaw dropping, reality altering, terrifying, bewildering, disrupting, disorienting, shattering shock of the resurrection of the crucified Son of God.

There is very little that is peaceful or soothing about the story of this week, whether the events that led up to Easter or the story of the resurrection itself! This was driven home for me again as I went through the events of Holy Week.

At our church’s Maundy Thursday service, we read through the old story of the washing of feet and the sharing of a meal, of betrayal and inevitable violence. We extinguished candles and watched as the light of the world was gradually snuffed out. We took bread and juice and reminded ourselves of the price of peace. We located our “spiritual journeys” in a story of betrayal and confusion and dismay.

Because our church doesn’t have a Good Friday service, I trudged off to worship in an Anglican church on Friday morning. At one point in the service, we were going through the gospel of John’s narration of Jesus’ “trial” and crucifixion. There was a narrator; there was Jesus; there was Pilate. And then there was a role for the congregation to play, as well.

We were instructed to stand up and assume the part of the “people” in the story. And so we would periodically have to yell out things like, “Away with him!” and “We have no king but Caesar!” and “We have a law and according to our law he must die!” and, of course, “Crucify him!”

We heard the famous reading from Isaiah 53, which described the “servant of God” in terms that at times made me feel like weeping.

I left the service feeling anything but soothed or enhanced. I felt kind of numb.

As human beings, we threw our absolute worst at God, and God took it. And responded with Easter.

And then on Easter Sunday, we encounter Matthew’s account of the surprise of resurrection. There is nothing particularly tranquil or spiritually enhancing or flowery about this text either! If we read things at face value, it’s a violently disruptive and disorienting scene! In Matthew’s account of Jesus’ death and resurrection (and his alone), there are earthquakes both when Jesus dies and when the stone is rolled away revealing an empty tomb. The cross and empty tomb shook the foundations of the world. It was like worlds were colliding.

Misplaced expectations… and the shocking fulfillment of God’s promises.

It was like tectonic plates were shifting and colliding when Jesus breathed his last and gave up his spirit on a Roman cross, and when, three days later, the two Marys encountered an empty tomb.

Fear, confusion, convulsion, dislocation, disorientation, shock, surprise, and, of course, unexpected and outrageous and uncontainable joy! This is what Easter is about.

If we zero down to the human level of Matthew’s story, we don’t see a lot of soothing tranquility there either. The guards shook and became “like dead men” at the sight of the angel at the tomb. Two times, the angel says: “do not be afraid”—the implication being that fear is probably the most natural response to the idea that the man whose body you had witnessed wracked with pain, nails ripped through his flesh, heaving and groaning on a Roman cross three days prior was now alive!

It wasn’t a “spiritual journey” but a very physical one that had the first witnesses terrified and confused.

And even after hearing the glorious news that Jesus was alive, it says that the two Marys left the empty tomb with “fear and great joy.” Jesus himself says to them: Do not be afraid; go and tell my brothers to go to Galilee; there they will see me. Don’t be afraid, don’t be afraid… But they couldn’t help it! Resurrection is a fearfully joyous and joyfully fearful thing.

So, from the confused expectations of Palm Sunday to the betrayal and injustice of Maundy Thursday to the anguish and horror of Good Friday to the stunned, fearful surprise of Easter Sunday, we must acknowledge that as Christians, the story we tell is a thoroughly jarring one, at very turn.

The church of Jesus Christ was literally shocked into existence. Easter was the utterly unexpected finale to a week of violence and horror. Easter was God’s vindication of the one upon whom we could barely stand to look, the one who had no beauty that should attract us to him, the one that was ground under the wheels of religious zeal and political expediency, the one that we preferred to crucify rather than follow.

Everything about who Jesus was—what he taught, how he healed and forgave and judged and restored, every false path and temptation to violence that he refused, and of course the way he suffered unto death—all of this receives a loud and decisive and holy “amen” on Easter Sunday.

We are a long, long way from Easter being about metaphors for the organic life of spring and peace and tranquility and soothing sounds and enhanced spiritual journeys.

Easter Sunday should be the culmination of a story where we have been shocked into silence at how horribly earth received her King, and stunned into joyful worship at the lengths God has gone to reconcile us to himself.

The above is an excerpt of a sermon preached at Lethbridge Mennonite Church, Easter Sunday, 2017.