“I have a complaint to make.” The comment was made by a member of our church who periodically drops in on me Tuesday mornings. The twinkle in his eye and the grin on his face signaled that this “complaint” was more of an observation or a conversation starter than an actual grievance. “We must have been the most “crossed” church around on Easter Sunday morning,” he said. “I counted at least four!” I thought back to our service and found that I couldn’t disagree.

In the grand scheme of things, our worship space tends toward a rather spare aesthetic. We have seasonal banners and various visuals that adorn the table in front of the pulpit. But compared to some of our high church brethren, there’s not much to catch the eye many Sundays. Easter Sunday was different, though. We had white ribbons emanating out from the cross permanently affixed to the wall behind the pulpit. We had an Easter banner with cross emblazoned with colour and light along with another banner with a smaller cross alongside a dove. There’s the glass windows in the shape of the cross on the side wall. And then there was crude wooden cross that we used in our Maundy Thursday service at the front. As part of our Easter service each year, we all come forward and filled the cross with flowers. So, yes, there were crosses.

I’ve been thinking about crosses today. We Christians make an awful lot out of what is on the face of it a rather unimaginative shape (two intersecting lines, a lowercase letter “t”) at best or a reminder of a primitive and gruesome mode of torture (at worst). But we love our crosses. I love my crosses. At least I sure seem to, based on a quick survey of my immediate surroundings.

Hanging from the mirror in my car is a rosary that I bought last year in a bustling Old Jerusalem marketplace.

On the walls and shelves of my study, there is:

Around my neck is another rosary, this one a wooden Orthodox version given to me by a young Syrian friend after their arrival in Canada last year. 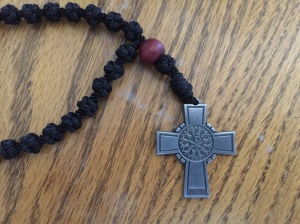 On one side of my desk is a beautiful prayer rope that a good friend recently made me with a Celtic cross at the end of it. In the center, a chi and ro, the two Greek letters that historically symbolize Christ the King, surrounded by human figures joining hands in community.

Beside it is a little bowl full of tiny olive wood crosses I was given after worshiping at a Palestinian Christian church last year.

Off to the other side, a tattered copy of a bulletin from a Good Friday service I attended at an Anglican church last week. On the cover, a cross. And on that cross hangs skeletal Jesus, ribs protruding, face turned down in anguish, nails driven through groaning flesh.

It’s a strange thing, when you think about it, this Christian fascination with adorning our bodies and our spaces with what was an instrument of execution. It speaks to the salvific weight we attach to said instrument, of course, even though, strictly speaking, it would be more theologically accurate to attend to the empty tomb. The Apostle Paul did mention something about how if Christ is not raised from the dead we’re still in our sins and rather to be pitied for imagining otherwise. That’s actually the point of Easter. It’s the empty tomb, not the cross, that does the most theological work. But I suppose empty tombs are kind of unwieldy to wear around your neck, and they probably don’t make for very impressive tattoos.

Paul also talked once about how we “always carry around in our body the death of Jesus.” He was talking about persecution, not interior decorating or body art, of course, but it’s an interesting turn of phrase. We always carry around the death of Jesus. I thought of the phrase as I looked at dying Jesus dangling off my car mirror this morning, as I fingered the Syrian rosary around my neck, as my hands ran over the prayer rope my friend made me. I wonder if, on some level, we carry Jesus’ death around with us as a simple reminder of the price of peace and the cost of reconciliation. A God who would love us to his end is a shatteringly beautiful thing, and we can’t take our eyes off these physical tokens that gesture toward it.

Perhaps we also carry Jesus’ death around with us as a reminder that death waits for us, too. T.S. Eliot once said that human beings cannot bear too much reality, so we flee from it. Yes, we do. Perhaps now, more than ever, in these comfortable, trivial, endlessly distractible and antiseptic times. But die we must, and die we will. And no matter how desperate we are to avoid this truth, there is something deep within us that hungers for a hope that our death, like the death of the one that all our crosses speak of, is not the end. Maybe all these crosses represent a determination (or at least a desire) to cease our fleeing and to face reality—our own and God’s—with all the clarity we can muster.

In the end, the very fact that we love our crosses so much—that we have taken a crude symbol proclaiming a horrifyingly brutal reality, and refashioned it as art—is only possible because God has done the same: taken something ugly and turned it toward beauty.

The image above is called Body of Christ by Linda Witte Henke, and is taken from the 2016-17 Christian Seasons Calendar.