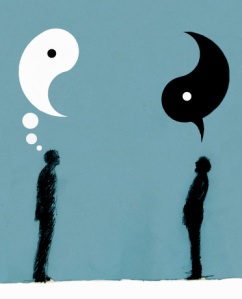 Back in my university days I took an undergraduate philosophy course on the problem of evil. We had been through most of the well-rehearsed responses to the question of how evil can co-exist with an all-powerful, all-good, and all-knowing God. Each had their problems, of course. “But what happens if we just say that God is limited?” our professor asked, with evident glee. What if God’s kinda just making it up as he goes along? What if God’s a bit of a selfish jerk who isn’t nearly as concerned with human misery as we are? Or, what if he’s a nice enough guy, but he just can’t do much about evil? What if he’s doing the best he can with what he has to work with? What if he’s learning as he goes, just like the rest of us?

This is the basic premise of a recent novel by MIT physicist Alan Lightman called Mr. g. Lightman offers an imaginary picture of God (Mr. g) in the process of self-discovery as he creates the world, touching on all kinds of metaphysical, moral, and scientific questions along the way. Mr, g is joined in the pre-creation void by his Uncle Deva and Aunt Penelope, faced with the prospect of a future of pure potentiality. Any kind of universe is possible. What will Mr. g do? More importantly, what will he learn about himself and his world in the process?

Of course, Mr. g ends up creating a universe like the one we happen to inhabit. An indescribably vast (and spectacular) tract of uninhabitable space with a tiny planet in the middle of it capable of bringing forth intelligent life. Mr. g names his universe “Aalam-104729.” But in this universe that contains intelligent life, rationality, and choice, of course, there eventually comes evil and suffering. And with the physical constants necessary to preserve and sustain the universe comes the inevitability of death. Mr. g discovers (and is grieved by) all of this as his project continues to evolve and unfold.

Along with Mr. g, Aunt Penelope, and Uncle Deva, there is also a devil-figure named Belhor. One day, Belhor takes Mr. g on a tour of Belhor’s domain. A conversation ensues along the way about the nature of good and evil. According to Belhor, evil is a necessary component of the universe. Mr. g disagrees: “Necessary? I could have prevented those despicable qualities. I should have prevented them.” Belhor dismisses this out of hand. We only understand things like goodness and beauty by reference to their opposites. All qualities come in pairs.

Then comes the following scene:

I followed Belhor through a corridor that led out to a coliseum, which was enclosed by a vast shimmering wall. The structure was decorated with a fine etching, intricate and beautiful. Upon closer inspection, I saw that the etching consisted, in fact, of names, billions upon billions of names. “Whenever a creature in the universe dies, its name appears on this wall,” said Belhor. Indeed, during the few moments we lingered there, new names appeared so rapidly that the etchings proceeded to wind round and round on themselves, sprouting little shoots like the tendrils of a growing plant.

“Listen,” said Belhor. One could hear something like faint moans coming from the wall. And also faint laughter. But both so indistinct that it was difficult to tell one from the other. Moans and laughter, countless tiny voices, all crowding against and on top of one another, so that it seemed like a single sound, a great whispered rush of existence. “The recorded voices of the dead,” said Belhor. “Recorded while living. So many little lives, each too faint to hear. And who would want to bother listening to any one of them. But added together, they make a perceptible sound. As you can hear, the individual sufferings and joys quite cancel themselves out. What remains is the great combined mass of them, a single breath.”

Good and evil, both necessary for a harmonious greater whole. Yin and yang. Remove one, and the whole universe—moral and physical—is upended. The chapter concludes with Mr. g struggling frustratedly against Belhor’s logic. If only God could do better…

Today, I reread this portion of Mr. g alongside two of the texts assigned for this Sunday. Both texts, one from 1 Kings 17 and one from Luke 7, tell the story of the raising of a widow’s son. In the former story it is Elijah doing the raising while in the latter, of course, it is Jesus. In both texts we see anguish and sorrow, pain and anger, fear and compassion. We see the hand of God at work in bringing life out of death but also, somewhat obliquely, in the causing or at least allowing of suffering in the first place (“O LORD my God, have you brought calamity even upon the widow with whom I am staying, by killing her son?”). We see a bit of a mess, from a logician or a metaphysician’s point of view. How could God be grieved by something God caused? Wouldn’t Jesus have known about the widow’s son beforehand if he was God? How can the same God be both the bringer and the healer of suffering?

What we do not see is evil portrayed a non-negotiable part of some harmonious whole. Not a “necessary” component of reality, implemented so that we might appreciate goodness and beauty more fully. Not mandatory “moral constants” of existence. No, evil and suffering are nothing more (or less) than a rage- and sorrow-inducing fracture in the heart of the cosmos and human experience.  For us, certainly. And somehow, it seems—mysteriously, maddeningly—for God as well.

When I was younger I desperately tried to reconcile the God of the Bible with the philosopher’s god with all of his impressive omni qualities and infinite perfections. But it didn’t work. It has never worked, and it will never work.

Whatever else the God of the Bible might be, he is not a hypothetical entity dreamed up to make sense and meaning out of human experience (we would surely come up with an easier god to live with if this were the case!). He is not a curious tinkerer in the sky, testing out theories, running experiments, and hoping for the best. He is not a moral psychologist, probing the responses and reactions of his creations to various stimuli and experiences. He is not the result of a logical equation. He is not a kind therapist, doing what he can to help us bear the weight of the suffering and evil that he wished he could do more to eradicate. Much as we might prefer these kinds of gods, much as they might help us make a kind of sense of things, this is not what we see in the Bible.

When it comes to God, we don’t always get what we want. We get less and, ironically, a lot more.

When it comes to the big questions of evil and suffering, we don’t get explanations or a finely calibrated harmonious whole to contemplate. We get a mess. But we also get God. God in the middle of the mess, God subjecting himself to the mess, and God promising to drag us out of and beyond the mess.

From: Books, Creation, Death, Doubt, Eschatology, Faith, Hope, Jesus, Philosophy, Science, The Bible, The Problem of Evil, Theology
← On “The Glory of Preaching”
The Way We Walk →
4 Comments Post a comment