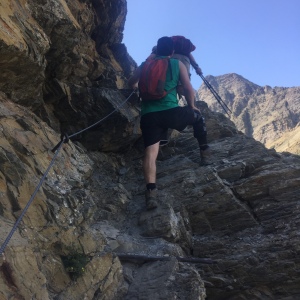 I went on a long walk last Friday. Seventeen kms or so, according to a map I consulted this afternoon, up and down a mountain. Not being a terribly proficient hiker and, consequently, not possessing a decent pair of hiking boots, I used someone else’s. Which (unsurprisingly) turned out to be a mistake. Halfway along my long walk, one heel had been rubbed pretty much raw. My hiking companion generously patched together a combination of gauze and duct tape to tamp down alongside the heel of my boot which enabled me to hobble the rest of the way up and back down on a hot summer’s day. Six days later, the heel is still a rather unsightly red. But the spectacular views of the Canadian Rockies were more than adequate compensation for the accumulated discomforts of my long walk.

I went on another long walk earlier this spring with my daughter. This time, it was around sixteen km. We joined a much longer walk called the Walk for Common Ground from Edmonton to Calgary for a one-day stretch between two small central Alberta towns. The purpose of the walk was to build community between indigenous and non-indigenous folks, to reflect upon treaty obligations, and to raise awareness more generally. It was another blistering hot day, and I returned home with a resplendent sunburn and aching feet. But, the shared experience with my daughter, the good conversation with new indigenous friends along the way, and the sense that we were participating in a meaningful activity more than made up for the difficulties of the walk itself.

A few summers ago, I was looking for some light reading and dove headlong into Henning Menkel’s “Wallander Mysteries” which follow the life and times of Kurt Wallander, a police detective in a small coastal Swedish town. These are your stereotypical page-turner crime novels—fairly formulaic, not particularly deep. Good summer reading, in other words.

I wasn’t expecting much food for theological thought in these books, but there was a section in the opening pages of Sidetracked, that has stuck with me since I first read it. The scene is a long way from Sweden, in the Dominican Republic, where a young father who has tragically lost his wife sets out from his impoverished village for the big city in order to get his young daughter baptized:

Pedro reached the city one afternoon as the heavy rain clouds gathered on the horizon. He sat down to wait on the steps of the cathedral, Santiago Apóstol, and watched the black-clad priests passing by. They seemed either too young, or in too much of a hurry to be worthy of baptising his daughter. He waited many hours. At last an old priest came slowing towards the cathedral. Pedro stood up, took off his straw hat, and held out his daughter. The old priest listened patiently to his story. Then he nodded.

“I will baptise her,” he said. “You have walked a long way for something you believe in. In our day that is rare. People seldom walk long distances for their faith. That’s why the world looks the way it does.”

Those last two sentences jumped out at me. People seldom walk long distances for their faith. That’s why the world looks the way it does.

In the context of the novel, walking long distances is literal. Pedro has walked a long way to find someone to baptize his daughter. And indeed, the Christian tradition has a long and rich history of pilgrimage—people literally walking for days, weeks, or months to visit sacred sites, or to spend extended time in prayer and meditation. My own Mennonite history is the story of people who are familiar with long distances, making their way from northern Europe to Prussia to the Ukraine, to places like Paraguay and Mexico and North America, always on the move seeking a safe place to practice their faith.

But the reference to “walking long distances” can obviously be interpreted metaphorically, too. We’re often quite prepared to exert ourselves for the health benefits or for the inspiring scenery or for causes we deem important. And faith can certainly weave its way through these exertions. But in broad terms, are we willing to “walk long distances” for our faith? Are we willing to sacrifice much of anything for it? Are we particularly keen to enter into the struggle of renegotiating and refining faith, of disciplining habits even when the bloom has come off the rose, of asking difficult questions or sitting with uncomfortable contradictions? Or is faith implicitly seen as a sort of spiritual garnish on essentially secular lives?

The other day a friend asked me if I thought that one of the reasons that the church was struggling in the North American West was because it asks so little of us. I’ve been thinking about that question a lot, lately. Perhaps the old priest in the novel is right. One of the reasons the world (or at least the church) looks like it does is indeed because we seldom walk long distances for what we believe in any more.

The image above is of yours truly, and was taken by my wife as I wheezed, gasped, and staggered toward the terminus of a long walk.

From: Church, Culture, Discipleship, Faith, Stories on the Way
← It’s This, But It’s Also That
Thursday Miscellany: On Resilience →
3 Comments Post a comment