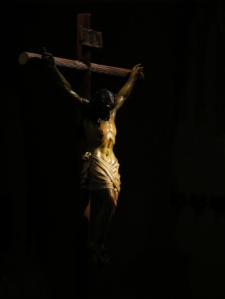 Last night was spent at a local theology reading group hosted by a philosophy professor from the university in town. It’s an eclectic mix—a few professors, a chaplain (who was gracious enough to invite me!), history and philosophy students, Mormons, atheists, agnostics, and a handful of other positions on the way to or from faith, no doubt. The discussion was freewheeling, lively, and very stimulating. I spend a lot of time in “churchy” circles where I am supposed to be some kind of “authority” or, ahem, “expert.” It was nice to take that hat off for an evening and just explore some interesting questions with others.

This year, the group is reading S. Mark Heim’s Saved From Sacrifice which looks at the atonement of Christ and the question of if/how this doctrine be redeemed in a context where many find it irrelevant, offensive, incomprehensible, or some combination of the above. In last night’s reading, Heim laid out five common “indictments” against the atonement: 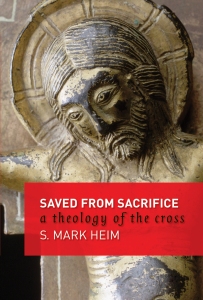 Any one of these indictments would be significant. Though persons may differ about which charge is most telling, there is an implicit sense that they are linked and mutually reinforcing. They assert no minor flaw in Christianity, but a consistent fault line in the whole foundation that runs from distorted views of God to spiritual guilt fixation to sacrificial bloodshed to anti-Semitic persecution to arrogant ignorance of world mythology. All this adds up to a fatally skewed faith, revolving around a central narrative based on sacred violence and the glorification of innocent suffering.

Of course, these are well-known and oft-rehearsed critiques of the atonement, both inside and outside the church. And while I think that there are things that could be said in response to each of the five indictments above, I don’t think there is some nice, neat, logical package that wonderfully answers each charge and ties the whole thing up with a nice pretty bow on top. The atonement is a puzzle and a deep mystery on a number of levels. I am suspicious of anyone who claims otherwise.

What’s interesting to me—amazing, really!—is that many people look at the atonement and come to very different conclusions than the ones above. Throughout history, many, many people have looked at this barbaric cross with its ugly violence and its logical contradictions and interpreted it as a sign of love. As a sign of their value in God’s economy. As a motivation to love and serve and sacrifice for others. As a beacon of hope in their own suffering of injustice.

It’s also interesting to consider which people come to different conclusions. At the risk of gross oversimplification, those protesting the barbarity of the cross and the immorality of the atonement tend to be drawn from the ranks of the liberal, educated, upper middle-class, often white, Western, post Christian set. The most scathing critiques of the atonement don’t tend to come from the poor, the uneducated, and the marginalized. They don’t tend to come from the Global South.  To quote Heim:

As a supposed charter for oppression, the theology of the cross has a peculiar history among the poor and the marginalized. The testimony of numberless such persons indicates that they do not see in the cross a mandate for passive suffering of evil. Instead, in the midst of a world that regards them as nobodies, they see an unexpected and extraordinary affirmation of their individual worth. That Christ, that God, was willing to suffer and die specifically for them is a message of hope and self-respect that can hardly be measured, one that transforms their lives. That God has become one of the broken and despised ones of history is an unshakeable reference point from which to resist the mental colonization that insists that God belongs to the side of the powerful.

In the Gospel of Luke, Jesus’ very first public words in the temple are these:

“The Spirit of the Lord is on me,
because he has anointed me
to proclaim good news to the poor.
He has sent me to proclaim freedom for the prisoners
and recovery of sight for the blind,
to set the oppressed free,
to proclaim the year of the Lord’s favor” (Luke 4:18-19).

Good news to the poor. And, perhaps, a caution to the rich, the entitled, the smart and sophisticated, the enlightened, the progressive, the more-righteous-than-God. Perhaps we’ve simply got our categories and our expectations all wrong. Perhaps the atonement was never meant to be conceived as a logically airtight, transparently necessary, morally pure and stainless divine transaction involving the transfer of forensic status between ontological unequals. Perhaps it was simply meant to be embraced and clung to as a lifeline for desperate people in a desperate situation.

And, as is so often the case in the divine economy, perhaps it is the poor, the oppressed, the prisoners, the blind, the weak, the rejected and forgotten, who understand this best and who will, God willing, lead and instruct the rest of us about the ways of this strange and beautiful God.