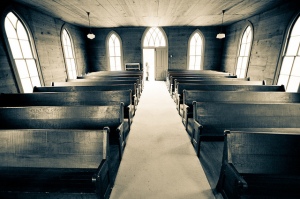 I am usually quite suspicious of oft-repeated expression, “I’m spiritual but not religious.” Actually, “suspicious” might be putting it rather mildly. I have something bordering on a pathological loathing of this phrase. It’s possible that I have even visibly shuddered in disgust in the various contexts where this expression makes its predictable appearance. I usually encounter it in people who either refuse to consider church in the first place or who have left it behind for the usual assemblage of real or imagined grievances. Or people who can’t be bothered to think very hard about what they might believe or why but like the idea of seeming a bit deeper than they in fact are. Or people who imagine that they have grasped the deeper truth that all religions are inadequately and intolerantly pointing toward. Or people who like yoga. Or people who think that all religions are neat and cool and inspiring except for when they say things that don’t confirm what they already think. Or when they infringe upon personal liberties and preferences… or sleep habits… or weekend plans or… well, when they infringe upon anything, really. “I’m spiritual but not religious” very often seems to me to be among the more vacuous statements that a human could utter.

Oh dear. I did say that “suspicious” was putting it mildly, didn’t I?

A funny thing happened last weekend, though. Over the course of a few conversations, I actually found myself developing a tiny bit of sympathy for this expression, even if in a heavily and qualified and belaboured way. I was attending the annual meetings for our provincial conference of Mennonite churches. As is the case with many denominational gatherings like this in the post-Christian landscape, it was a bit of a grim experience at times. Deficit budgets, struggles to fill various committees, stories of aging, dwindling congregations, stories of congregations leaving over theological disputes (mainly around issues of sexuality), anguished conversations about “how to get the young people back in our churches”­—these were the themes that floated to the surface. There were stories of hope and health and vitality, too, and it’s always wonderful to reconnect with friends and colleagues from other churches. But I think it would be fair to say that there was at least a wispy cloud of anxiety and uncertainty that hovered over many of the presentations and conversations last weekend.

This is, as I said, the shape of the landscape for many churches and denominations in the post-Christian west. The difference in our little Mennonite outpost of Christianity is that all of these issues are negotiated in the context of an ecclesiology that places a heavy emphasis upon communal discernment. So conversations about theological issues or about how church structures might need to change to reflect changing demographics and giving patterns or about how God might be steering the church into different expressions of worship and mission are negotiated together as communities. Which sounds really good in theory. But in practice, it often means multiple layers of time consuming and at times not particularly fruitful meetings at local, provincial, and national levels. We have meetings and meetings about meetings and meetings to decide what we’re going to say at other meetings and meetings to reflect upon which future meetings we might need to process past meetings. We have feedback forums and collations of feedback that are re-presented at other meetings and workshops to allow opportunities for further feedback and… well, you get the idea. These discernment processes can drag on for years and years. We’re kind of like Tolkien’s Ents. We seem to think that nothing is worth saying unless it takes a long, long, long time.

On a theoretical level, I can easily make a case for the value of all of these committees and meetings and discernment processes and forums. They represent a guard against the abuse of power, they express our theological convictions about the priesthood of all believers, how the Spirit is present in each one of us, etc. Yes, yes. All true. But on a practical level, I (and others) see and hear many people—particularly younger people—looking at all of this and just saying, “yeah, not interested.”

Which brings me back to the two conversations. One was with a young man in the coffee line at the gathering this past weekend. We had just sat through a presentation about discernment about church structure going into the future. He looked as fatigued as I felt. “So what do you think of all this?” I asked. He sighed and said something like, “You know, I grew up Roman Catholic… and there are many things that I appreciate about Anabaptist theology… But you know, in the Catholic Church, when you come to mass your only job is to worship—to encounter Christ in the sacraments. You aren’t asked to constantly be figuring everything out all the time. It’s exhausting. It’s no wonder to me that people aren’t signing up for this! People want to encounter Christ in church not spend a decade hammering away at some issue in a thousand meetings.”

The second conversation was with another young-ish person who was sorta, kinda, maybe in the process of leaving the Mennonite church. They said largely the same thing. They came to worship looking to encounter God. They wanted to be involved in the church to help others do the same, to form meaningful relationships through which to learn and grow in the love and knowledge of God. What they too often got, they said, was an inflexible commitment to structures and processes and meeting after endless meeting and committees and sub-committees and sub-sub-committees and discernment processes and… well, eventually they just got tired.

Now, I know that “church business” is not a synonym for “religion.” Not by a long shot. I know that the etymology of the word “religion” points to something true and beautiful and, in my view, vitally necessary. But I think that, rightly or wrongly, in people’s experience these two are not far off. “Religion”=“endless meetings and mechanical church services”; “spirituality”=“relationships, existential issues, prayer, connection with God!” And if we can suspend our judgment and work temporarily with these crude and, yes, not altogether admirable or accurate categories, it’s not hard to see that when people who are hungry for or curious about or open to God come to church expecting this hunger to be addressed… and what they in fact get is an invitation to serve on a committee…

Then I guess I can get why someone might be tempted to say, “I’m spiritual but not religious.”

To head off any number of critiques or complaints that might arise based on the preceding, I know that church structures matter. I know that discernment processes are important. I know that meetings must be held (even if I’m reasonably convinced that we could do with few less of them). I know that serving on committees and encountering God are not mutually exclusive categories (who knows, it might even be possible to encounter God on a committee!). I know that past generations laboured long and hard through many a tedious committee meeting to deliver to us the institutions and theological frameworks that form the ground upon which we now stand. I know that our manner of doing things as an Anabaptist church expresses deep and important theological convictions.

I guess I just wonder if all of these “I know’s” might sometimes—particularly at this cultural moment—get in the way of the one “I know” that really matters: to know God. Because this is still the point of it all, right? To know God? Not to preserve our denominational identity or institutions, not to come up with a shiny new committee or task force to address this or that vital issue, not to be vindicated over our theological enemies, not to convince the broader church to pursue our pet agendas, but to “know you, the only true God, and Jesus Christ, whom you have sent” (John 17:3).

The church is still about encountering God… Right?

From: Anabaptism, Church, Community, Culture, Discipleship, Faith, Jesus, Mennonite Issues, Pastoral Ministry, Religion, Spirituality, Theology
← What if the Sky is Falling?
A Stone or a Kiss →
30 Comments Post a comment